Regardless of their tough shells, turtles have several predators that hunt and harm them. All types of chelonians (including freshwater turtles, sea turtles, and land tortoises) have predators.

While turtles have several defenses against predators including tough shells and the ability to withdraw into their shells, they are not one hundred percent safe.

Moreover, not all chelonians can withdraw into their shells. Adult turtles, however, have fewer predators, with juveniles, hatchlings, and eggs having the most predators.

In captivity, you must protect your pet turtle from potential predators such as opossums and Raccoons. Even dogs and cats can try to eat your pet chelonian. Adequate protection is paramount.

Freshwater turtles unlike their marine counterparts are more likely to be eaten. This is because they are generally not as large as most marine turtles. Since there are many freshwater turtles in existence we will cover only the most popular ones.

Map turtles (Graptemys) are popular American turtles. These turtles are commonly kept as pets. As pets, they are at risk of being eaten by dogs and even cats.

As such protect them from these domestic animals. In the wild, some of their predators include the following.

Predators of the eggs are:

Predators  of emerging hatchlings are:

Predators of the hatchlings once they have reached the water are:

Mud turtles and musk turtles are superb predators themselves. As adults, they have very few predators. When threatened they release a very foul scent that can repel even the fiercest of predators.

The few known predators eat the eggs and young. These include the following:

Slider turtles (Trachemys scripta) are among the most popular turtles kept as pets. These turtles are easy to care for, tough, and resilient. There are three subspecies of sliders and these include red-eared slider (T. s. elegans), yellow-bellied slider (T. s. scripta), and Cumberland slider (T. s. troostii).

The word cooter originates from the word ‘kuta’ which was brought to North America by African slaves. Kuta means turtle in the Malinke and Bambara languages. Cooters make great pets and are relatively successful species. They aren’t threatened nor do they have that many predators.

So what eats cooters? Well, here are some predators of the river cooter:

Box turtles are usually confused for tortoises as they have high domes and are usually terrestrial. However, these turtles belong to the family Emydidae (pond turtles). Adults have very few predators as they can retrieve fully into their shells once they are about 5 cm in length. As they grow their shells become thicker and harder. Their hinged shells can close off completely.

The hatchlings, juveniles, and young however do have predators. These include:

The softshell turtles we will concentrate on are the North American softshells, which is the genus Apalone. These are the more popular softshells. There is very little information on other softshells from around the world especially when it comes to what feeds on them.

Predators of their eggs include:

Predators of juveniles include:

The painted turtle is the commonest turtle in North America. These turtles live in ponds, streams, lakes, and rivers. Since these turtles are widespread, they are commonly bred and sold as pets.

Sea turtles do not have a lot of predators. This is because they are large and are protected by their shell. However, unlike most freshwater turtles and tortoises, sea turtles cannot withdraw into their shells for protection. This leaves most of their limbs and heads exposed.

However, unlike tortoises, sea turtles are pretty quick and can reach speeds of 22 mph (35 km/hr) when scared. Regardless of this, their exposed flippers and head make them targets for predators such as sharks, and orcas.

According to studies conducted by the Sea Turtle Conservation, as few as 1:10,000 turtle eggs reach adulthood.

Leatherback sea turtles (Dermochelys coriacea) are huge and as adults have almost no predators occasionally they are attacked by an orca and other large predators. The eggs, hatchlings, and young are most likely to be eaten.

Known predators of the hatchlings include all those mentioned for the eggs in addition to:

In comparison to other sea turtles, the hawksbill turtle is quite small. As such, even adults have formidable predators.

Known predators of hawksbill eggs are:

Green sea turtles are endemic to the coastal lines of the world’s oceans. They can be found in all the oceans (in tropical and subtropical parts) but are most abundant in the Atlantic and eastern Pacific.

Known predators of the hatchlings are:

Known predators of the subadults and adults are

The rough scaly skin and tough shells of adult and subadult loggerheads (Caretta caretta) protect them from predators. However, the younglings and eggs are most vulnerable to predators.

Known predators of loggerhead’s eggs are:

Known predators of Flatback’s eggs are:

Known predators of the hatchlings when they journey to reach the ocean include:

Tortoises are very tough animals and as such have very few predators. Their large sizes and tough shells mean that few animals mess with them. Tortoises can also fully withdraw into their shells and close their shells off completely.

This offers protection even against the fiercest of predators. However, the eggs and young tortoises aren’t that well protected. Many animals prey on the young and the eggs.

Tortoises are most vulnerable when they are young. As hatchlings and eggs, they are defenseless as mother turtles do not take care of their hatchlings nor do they guide the eggs. Animals that eat tortoise eggs include raccoons, boars, crabs, feral cats, feral dogs, humans, birds, and many more.

All these predators have to do is dig up the eggs once they locate the nests. Once a nest is compromised, most of the eggs end up being eaten by scavengers. Even eggs that are buried deep aren’t safe from predators. Once the eggs hatch, the smell of the egg attracts predators.

The acute olfactory sense of predators such as birds, raccoons, and other predators enables them to easily locate the hatchlings. Humans are also responsible for collecting hatchlings for the pet trade, food, traditional medicine, and other consumption.

Once most tortoises are adults, very few predators bother them.

A list of predators that eat American tortoises such as Desert Tortoise and Gopher tortoise include:

A list of predators that eat African tortoises such as Sulcata tortoise and leopard turtles include:

What eats turtles in a pond?

Turtles that live in ponds are freshwater turtles and these include the likes of musk, mud, map, and softshell turtles.

Animals that eat turtles in a pond include other bigger turtles, fishes such as the ray-finned fish and large-mouth bass, water snakes, alligators, and birds of prey such as crows who can swoop in to catch basking turtles.

What eats turtles in a lake?

Lakes are bigger than ponds but turtles in lakes face similar predators as turtles that live in ponds. Expect animals such as other turtles, large predatory fishes such as ray-finned fish and basses, snakes, alligators, and birds to eat turtles in lakes.

What eats turtles in the ocean?

In the sea, animals such as killer whales, sharks, and humans are known to hunt and consume adults and subadult sea turtles.

Hatchlings have many more predators and these include sharks, killer whales, humans, seabirds such as herons & seagulls, crows, crabs, crocodiles and many more.

On the beaches, the eggs are collected and eaten by dogs, jackals, jaguars, humans, hogs, foxes, raccoons, otters, and others.

A whole host of animals eat turtles including humans and other turtles. Larger carnivorous turtles such as snapping turtles are known to eat smaller turtles Expect animals such as sharks, killer whales, and saltwater crocodiles to hunt and eat sea turtles.

With freshwater turtles, expect larger turtles, predatory fishes, and even larger mammals such as raccoons to eat turtles.

Human consumption is one of the biggest threats to the wild turtle populations. Unlike other species, humans overconsume turtles.

Turtles are consumed for their meat and in many places around the world, turtles are used in the making of traditional medicines. For instance, the unregulated trade of turtle parts for traditional Chinese medicine has been a major threat to several endangered Asian turtles such as Yangtze giant softshell (Rafetus swinhoei).

Sea turtles are usually hunted and eaten by other sea animals. Some of the sea animals that eat young sea turtles include sharks, saltwater crocodiles also known as marine crocodiles or sea crocodiles, crabs, and orcas.

With adult sea turtles, sea animals that hunt them include sea crocodiles, requiem sharks (which include tiger sharks), and killer whales (also known as orcas).

Can a shark bite through a turtle shell?

While the turtle’s shell is tough, it isn’t indestructible. Large sharks such as requiem sharks do have the bite force to bite through a turtle’s shell. This is especially true of hatchlings and young sea turtles. Sharks have a much harder time biting through the shell of a fully grown adult sea turtle.

Where do turtles fit in the animal food chain?

Depending on the species, turtles can be anywhere on the food chain although no turtle is bottom of the chain. Turtles such as adult green sea turtles, and adult snapping turtles are predators that are high on the food chain.

Can a snake eat a turtle?

Can a dog eat a turtle?

Dogs also eat species normally kept as pets such as map turtles and cooters. With their strong bite force, dogs can bite through the shells of freshwater turtles and the shell of all turtle hatchlings.

If you have a turtle, you have to think of protecting it from feral and domestic dogs including your own dog. While many dogs will ignore turtles, many will also attempt to bite or even eat them.

While we aren’t supposed to come between predator and prey in the wild (most of the time), we are responsible for keeping captive-bred turtles safe. Even in a captive environment, there are many threats around.

Dogs have been known to chew on turtles and cause a lot of damage. Cats have also been known to harm turtles. Even if your cat or dog seems nonthreatening, it’s never a good idea to leave them with your turtle unsupervised.

Turtles housed outdoors also need to be protected from wild predators such as Raccoons. Ensuring that your turtle is well protected from animals that eat them is your responsibility.

If you have any questions or additional information, kindly leave a comment. 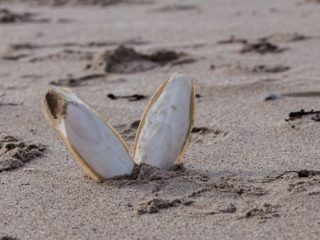 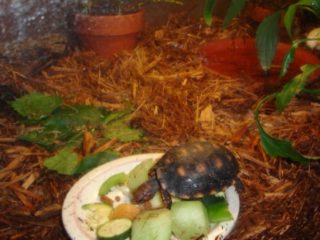