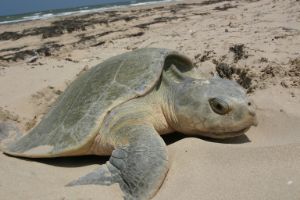 They will nest up to 3 times (slightly less than the Flatback Sea turtle) a season and lay about 110 eggs at a time. The egg’s incubation period lasts about 55 days. There are approximately 2,500 nesting females.

Read on below to learn more!

What is the Kemp’s Ridley sea turtle?

The smallest of sea turtles, Kemp’s Ridley sea turtles are the fewest in number today. It has a life span that reaches 50 years. The Gulf of Mexico is their primary home with some residing as far as Nova Scotia. Upper shells are greenish to grey with cream to yellow bellies.

Adults are seen within the confines of the Gulf of Mexico. The young (juveniles) are found within tropical or temperate coastal areas in the northwest Atlantic Ocean. Some swim up and down the US east coast.

Kemp’s Ridley sea turtles can grow only up to 2 4 inches long. The head is triangular-shaped with a beak that is slightly hooked and a large crushing surface. Hatchlings are the darkest black which later matures to a greenish shade.

It is interesting to note that hatchlings have a caruncle. It is a single temporary tooth that grows for helping them break out of their shells. The carapace of adults is nearly circular on the top part. It usually measures the same in width as it is in length.

The bony carapace doesn’t have ridges. It has five large and rounded non-overlapping scales. The carapace can be dark grey or greenish-with a white to a yellowish plastron. They have one claw on the front flippers while the rear flipper can have up to 2 claws.

Kemp’s Ridleys look for sandy and murky waters in shallow areas. Adults mostly live in nearshore coastal habitats which they find to be perfect feeding grounds. Besides the Mexican Gulf, they can be seen from Florida to New England. Some are spotted in the Mediterranean Sea and in the waters of Morocco on occasion.

Kemp’s Ridley sea turtles show long migration patterns. Thus, most of their time is lived in isolation; though, mating and nesting would provide them time for socialization. Male Kemp’s ridleys may migrate annually, swimming between breeding and feeding grounds.

Some, however, do not migrate and wait to mate with females they randomly chance upon. Migration patterns for the female Kemp’s ridleys show that they frequently migrate to and from their nesting beaches around Mexico and south of Texas.

Some studies show that sea turtles can hear low to mid frequencies of sound. Its hearing is poorer compared with some other mammals. This may be because the opening into their ear has a covering of thick skin (cutaneous plate).

This can dampen the sound they hear on land but provides good conduction for underwater sounds.  As for their sight, vision is nearsighted in the air but they can see well underwater. Sea turtles like a Kemp’s Ridley possess an acute sense of smell. They can capture the scent of good feeding spots.

Kemp’s Ridley sea turtles dive into shallow waters to feed on crabs (their primary food) at the bottom. Powerful jaws allow them to easily squash and grind crabs and other hard-shelled prey. They also eat sea urchins, squid, fish, sargassum, seaweeds, and jellyfish. The Louisiana waters are their primary feeding ground in Mexico.

Like other sea turtles, Kemp’s Ridley sea turtles are in their element underwater. Though the smallest, they are equally fast swimmers. Their flippers and ideally contoured shells allow smooth movements in the water.

They can hold their breath for many hours as they make a long journey. They can stay underwater for at least 4 hours and even enjoy some sleeping time before coming back up for air. They are drawn to light and can use it for navigation while in the water or when making their way towards the shore and other safe places.

Female become sexually mature at 12 years. They begin nesting in intervals of 1 to 3 years. Like ridleys, these sea turtles observe mass synchronized nesting. This practice is called ‘arribadas’, from a Spanish word that means ‘arrival’.

This method of nesting is unique to Kemp’s Ridley sea turtles. Females take over specific portions of beaches. It can be a dramatic scene to watch as they continuously lug their bodies throughout the sandy beach, never stopping until they’ve satisfied themselves with their chosen nesting spot.

Each season, they would lay several clutches. Nesting females may nest 2 to 3 times per season. They are high in migration and makes the long travel back to their nesting beach. Each clutch can bear 100 to 110 eggs on average. Hatchlings break their way out of their shells in 55 days.

What are the predators they face?

Kemp’s Ridley sea turtles practice mass nesting and this attracts a lot of predators. Weasels, foxes, raccoons, and dogs eat exposed eggs on the sandy beaches. Hatchlings are also in danger of predators while they crawl their way to the water. There are also human predators to contend with. Some kill adults and youngsters for their meat.

The overharvesting of Kemp’s Ridley sea turtle eggs poses the greatest threat to their survival. Efforts are underway to protect nesting grounds and to prevent fishing entanglements and capture. Accidental captures by shrimp trawlers is another factor that contributed to their significant decline.