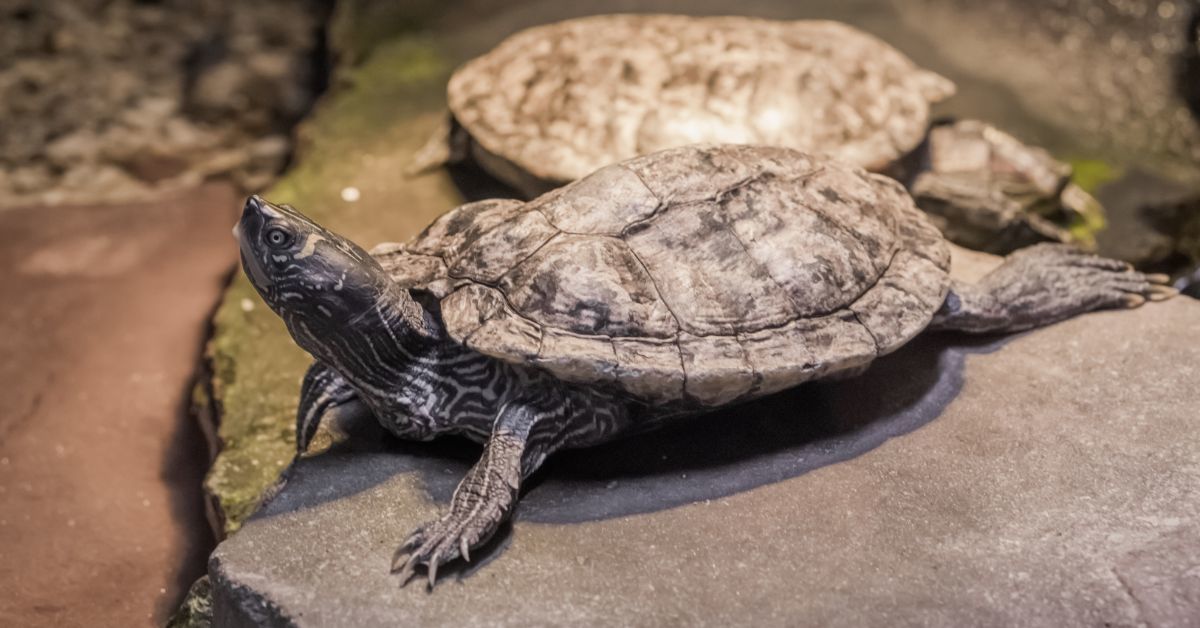 The Cumberland slider is a subspecies of the Pond slider. This subspecies is native to the Tennessee and Mississippi river drainage areas and the southeast of North America.

This turtle is one of the most popular pet turtle species. They are easy to care for as well as friendly. These characteristics make them ideal turtles for all turtle keepers – from the novice to the experienced.

As semi aquatic turtles, the Cumberland sliders will only feed in water. An aquatic set up is necessary to house this wondrous American turtle.

The T. s. troostii has an olive brown to greenish carapace with yellow markings.

Their hinged plastron is just a little smaller than their carapace. The skin of this turtle is colored similarly to the carapace and has yellow stripes.

Other breeds comparable to the Cumberland slider include the red-eared slider and the yellow-bellied slider.

The Cumberland Slider has a lifespan for around 40 to 50 years.

Although omnivorous, the juveniles are predominately carnivorous while the adults are primarily herbivorous. In the wild, they feed on mollusks, worms, insects, crayfish, tadpoles, fish, algae, plants and aquatic vegetation.

When feeding a Cumberland slider, its age is important. With juveniles, it is advisable to feed them a more protein-based diet, while adults prefer to feed more on vegetables.

Commercially produced turtle food such as ReptoMin Food Sticks is also an ideal alternative. Supplement the diet with calcium and vitamins. Cuttlefish bone with hard backing removed is an excellent choice of calcium.

As with other aquatic and semiaquatic turtles, the Cumberland slider will only feed in water.

This turtle requires a lot of room to be comfortable. For every inch, you must provide 10 gallons of water.

The tank needs a pump and filtration system as well as a heating system (if the water temperature drops below 75 degrees Fahrenheit).

The pump and filter must be rated for a water tank that is twice the size of the turtle tank.

The basking spot of this turtle must above the water level and accessible to the turtle. Rock slabs, driftwood, corkbark, and commercially produced basking areas all make excellent basking spots.

A suitable reptile light, such as MyComfyPets UVB Light, emits both heat and UVB light and can be affixed overhead the basking spot.

Breeding happens during the winter, spring, and fall months. The females go to extreme lengths to nest.

This may result in them being run over by cars as they cross roads. Females lay 6 to 15 eggs per clutch with most females laying two clutches annually.

Keeping a clean tank and proper feeding routine are the best measures against health problems.

Common health problems include vitamin A deficiency and metabolic bone disease. Some signs of an unhealthy turtle include wounds, furry mouth, refusal to eat, eye infections, and lethargy.

Also, Cumberland sliders may harbor salmonella. As such, it is important to wash your hand thoroughly before and after handling them. Also, ensure you use separate utensils for them.

You should contact a vet if you think your turtle has any health issues.

The predators of the T. s. troostii include but are not limited to alligators, wading birds and crows, predatory fishes, marsupials, raccoons, otters, grey foxes, and red foxes, skunks, American minks, coyotes, and armadillos.

Additionally, largemouth bass, white-tailed deer, and striped skunks are known to feed on the eggs of this species.

Humans are also known to shoot basking sliders as well as accidentally harm them with vehicles.

The shell and coloration of this turtle protect it from predators. They can retract their heads and extremities into their shells for protection.

The Trachemys scripta is not an engendered species. According to the IUCN red list, they are of least concern. Similarly, they do not have any special status in the United States.

However, they are a threat to other species when they are introduced by humans to habitats and places where they do not naturally occur.

They are invasive and in many parts of Europe and Asia where they have been introduced, they out-compete many native species.

As such, the European Union declared the import and sale of the T. s. troostii (Cumberland slider) and in fact the entire Trachemys scripta speciesas illegal.

Also, they seek to eliminate the slider populations in Europe so as to protect native turtles.

As such, turtle keepers are advised not to release their pet Cumberland sliders into the wild unless it is native to the area.

Difference between a Cumberland Slider and Red Eared Slider

As always, it is important to remember that selling/buying of turtles (for a pet) with a carapace length of less than 4 inches is illegal. As such when acquiring the Cumberland slider, ensure that it has a shell length over 4 inches.

As the slider is easy to care and a friendly species, they make excellent pets. In addition, they are available in most pet turtle shops in the United States. Don’t forget to leave any questions or comments in the comment section below!