This turtle is lively, hardy and easy to care for. Since they are quite common, their needs are well-known and are readily captive bred. All of the characteristics mentioned above make them an excellent pet turtle for beginners.

The northern map turtle belongs to the genus Graptemys, which is commonly referred to as map turtles. There are 14 extant map turtle species.

The lines on their carapace are yellowish/orange in color. As they age, the lines fade. Their carapace is olive or grayish brown.

This northern map turtle can be found throughout the southeastern part of Canada and the eastern half of the united states.

The common map turtle can be found in water bodies such as lakes river-bottoms, and ponds with a lot of vegetation and logs to bask on.

An aquatic setup is necessary when it comes to this turtle species. While juveniles require small aquariums such as a 20-gallon  Marina LED Aquarium Kit, adults require a much later aquarium.

To prevent double spending, you can buy a large aquarium and fill it with less water. As the turtle grows, you can increase the volume of water in the aquarium. A large aquarium ensures the tank doesn’t get dirty easily and the turtle has a lot of room to swim.

The northern map turtles are excellent and lively swimmers and as such require a large aquarium. For a single adult male, an aquarium with a water volume of 75 gallons works well. Females generally require larger aquariums since they are bigger. For an adult female, an aquarium of size 125 gallons work.

Since chlorine may irritate the turtle’s eyes, it’s advisable to use water without chlorine. If you plan on using tap water, dechlorinate it. Some dechlorinators, such as Natural Rapport Aquarium Water Conditioner, not only remove chlorine, it also removes chloramines (which is used by many cities in place of chlorine).

Use a filter that is marked for at least double the size of the enclosure. Some quality aquarium filters include MarineLand Penguin and Polar Aurora External Aquarium Filter. In addition to this, change a quarter of the water in the tank every week.

Every month, replace the water in the aquarium  (with the aid of a Python Aquarium Maintenance System). This should not harm turtles but can kill delicate fish. Keep this in mind if you plan on housing the turtles with fish.

With aquariums, substrates are optional. Having no substrate avoids issues such as intestinal prolapse due to ingesting substrate. Additionally, bare bottom aquatic setups are easier to clean. To prevent substrate ingestion, keepers prefer to use river gravel as these are too large to swallow. A good substrate choice is Carib Sea Peace River Gravel.

As a species endemic to a temperate region of the earth, the temperature needs of this turtle is easy to provide. The ambient temperature of the enclosure needs to be around 75 F to 80 F.

It is important to provide UVB lighting as this allows the turtle to synthesize vitamin D3 which is necessary for the absorption and utilization of calcium.

Uvb lighting allows the turtle to auto-regulate the production of vitamin D3, something that can’t be done with dietary vitamin D3. The best UVB light for turtles includes the ReptiSun 5.0 and ReptiSun 10.0.

To maintain a circadian rhythm, the lights should be off for 12 hours a day, and on for 12 hours a day. This needs to be done fastidiously and consistently at the same time each day. If you are unable to do this yourself, install a timer.

As the northern map turtle basks often, a basking ramp is a must. The ramp needs to be large enough to easily accommodate the turtle. I recommend the OASIS #64226 Turtle Ramp.

For large males and females, you may need to custom build a ramp to accommodate them. Another way to provide a basking platform is to create a gradual slope with a large flat top using flat slates such as the Natural Reptile Habitat Rocks. This method is quite expensive but gives the aquarium a natural feel.

Although they do accept vegetation/plant food, northern map turtles are primarily carnivores. As such, they readily accept protein foods. This makes feeding them easy.

However, it is important not to overfeed them too much protein. This can lead to rapid growth which causes pyramided shells and liver and kidney problems.

In all, deeding the northern map turtle too much protein can prevent the turtle from attaining its full lifespan. Ensure, the turtle is fed a well-rounded diet.

Good commercial turtle diets like the ones listed have excellent proportions of protein, calcium and vitamin D3. As such, they can make up three-quarters of the turtle’s carnivorous diet.

The rest can be made up of bloodworms, krill, crickets, feeder fish, crayfish, earthworms, and ghost shrimp. Commercial turtle diets are easy to store, unlike live insects.

They also need to be offered plants such as Anacharis and romaine lettuce. If you can include these two in the turtle’s diet. Other aquatic lands to feed them include water lilies, frogbit, water hyacinth, water milfoil, duckweed. hornwort, water lettuce, water starwort, water fern, and pondweed

Some leafy greens other than romaine lettuce to feed them include dandelions, mustard green, zucchini, beet leaves, squash, endive, red leaf lettuce, escarole, kale, and collard greens. Avoid iceberg lettuce as they are low in fiber.

Only offer fruits such as strawberries, and banana as a treat and never as part of their staple diet. It may be best to avoid fruits all together since they are high in sugar.

Avoid feeding them mice or any animal with fur.

I recommend a diet composed of three-quarters commercial supplemented with the animal protein and plants mentioned.

Commercial diet is fortified with nutrients such as dietary vitamin D3, calcium, and many others. If you don’t feed the turtle commercial turtle diet then you need to supplement their diet with mineral/nutrient supplements such as Rep-Cal.

Feed hatchling every day with just enough to diminish their appetite. Feed 6-month olds, once every two days. Plants can be offered daily.

Northern map turtle may be shy but they acclimatize fairly quickly especially when acquired as hatchlings. As they come to associate you with food, they will seek your presence and beg for food.

They are diurnal turtles and are usually found basking during the day. They usually sleep underwater but may sleep on the basking platform. If the water is very warm (80 to 82 F), they will bask less.

They can peacefully cohabit with other map turtles, cooters, and painted turtles. They don’t do well with softshells, and snapping turtles. Males may also harass females.

As with other turtles, the northern map turtle is a hardy species. Signs of health problems include cuts and bruises, gaping mouth and nose, swollen eyes and a runny nose. Sick turtles may also refuse to eat.

Pyramided Shell– This is usually due to overfeeding the turtle protein especially during the first two years of the turtle’s life. If corrected early, the scutes of the turtle should develop normally.

However, if not corrected early, the outcome is permanent. A pyramided shell may inhibit the turtle’s movement and the ability to mate.

Infection – Unclean water can lead to infections. Ear infections which are large bumps behind the ears have to be treated by a vet Ensure the water is changed frequently and is properly filtered to prevent infections.

Cuts and bruises – If there are sharp edges in the aquarium, the turtle may get cut or bruises. Similarly, an aggressive tankmate may bite and scratch the others. Treat the cuts and bruises with a topical treatment such as betadine solution, and relocate the aggressor.

Other health issues to watch out for include overgrown claws and beak, sores, loss of appetite, lethargy, abnormal growth of limbs and shell, and furry mouth.

Although not as popular as the Mississippi map turtles northern map turtles can be acquired from notable breeders and even online from sites such as the Turtle Source.

Expect to pay between $30 and $100 for this map turtle. Since they are a North American turtle, they are relatively easy to find.

According to the IUCN Red List, the Graptemys geographica is classified as of Least concern. They are said to be widespread and even abundant in several locations.

However, these species are highly sensitive to changes to their habitats and as such the alteration of their habitat negatively affects their wild populations.

The northern map turtle is an easy turtle to care for. Additionally, they are quite readily available. However, as with any turtle, commitment is needed to properly care for the species.

Scheduled yearly checkups can ensure your turtle is healthy and happy. If you have any questions or additional information, kindly leave them. 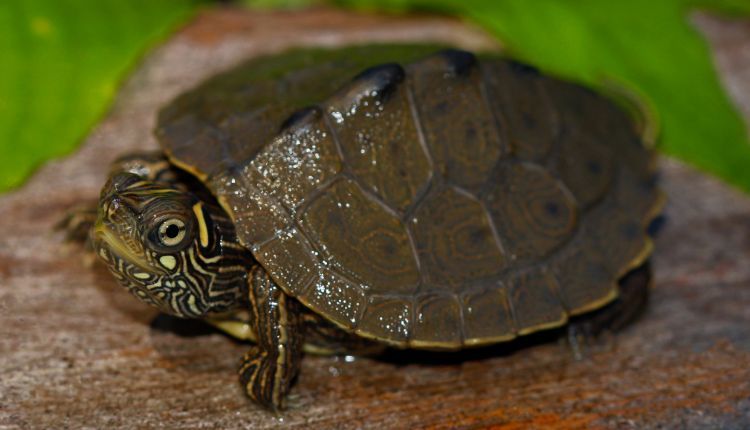 HI, I HAVE 2 TURTLES AND I NEED SOMEONE WITH A GREAT HEART AND GIVE THEM A GOOD HOME. I HAVE A BABY IN THE HOUSE AND CAN NOT TAKE CARE OF THEM BECAUSE THEY ARE FREE IN HOUSE SO THE BABY SOON IS GOING TO START CROWLING. THAT'S THE REASON WHY I NEED TO GIVE THEM AWAY. WOULD SOMEBODY PLEASE HELP ME FIND A LOVELY HOME FOR THEM?