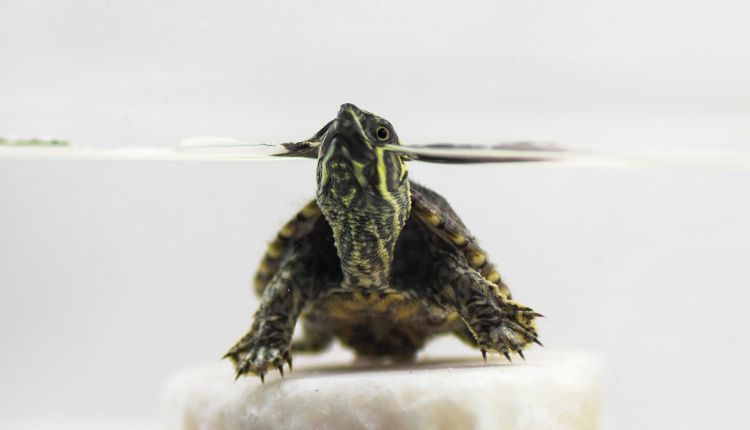 The musk turtle is among the most popular turtles kept as pets. This interesting turtle is endemic to North America and is considered a terrapin. While the common name usually refers to the common musk turtle, it can also be refer to all musk turtle species such as the razorback musk turtle, and the loggerhead musk turtle.

Musk turtles and mud turtles are similar in appearance and both belong to the family kinosternidae. While there are several types of musk turtles, the common musk turtle (Sternotherus odoratus) also known as stinkpot turtle is the most popular.

These turtles are native to North America, in particular, eastern United States.

The razorback is one of the largest of the musk turtles and has a lifespan of roughly 20 years. The longest recorded living turtle was 29 years up to this date.

As you may expect from the name the Flattened Musk turtle has a shell that is more flat rather than high domed. They are typically brown in color with the head having a olive color with speckles on it.

The common musk turtle is relatively small in size for a turtle and makes for a fairly good pet as water turtles go.

There are two subspecies of the loggerhead musk which are the Stripe Neck Musk Turtle and the Nominate Loggerhead Musk Turtle.

Previously the Aliflora Musk Turtle or Intermediate Musk turtle as you may know it was thought to be a hybrid of the loggerhead musk turtle and stripe-necked musk turtle.

This theory has been dispelled. Turtle is the Choctawhatchee and Escambia River basins are in their own ecosystem and thus are on their own path of evolution.

The theory of evolution for this species has to do with the migration of the musk turtles and the changes in climate. All of these combined events have created the evolution of the intermediate musk turtle.

Learn more about it here.

The Giant Musk Turtle is another one of the larger musk turtles and spends the majority of its time in the water.

The Mexican musk turtle can be identified by its color which is usually either brown, black, or green in color, with a yellow underside.

The carapace also has three distinct ridges which run the length of their shell.

They prefer the shallow parts of the water body they inhabit. This genus can be found basking on tree trunks and branches of trees overhanging the water. As North American turtles, they thrive in temperate climates.

As an aquatic reptile, the musk turtle requires an aquatic habitat. A suitable enclosure is an aquarium or a small pond such as a koi pond. As already mentioned, they prefer shallow waters and don’t need a tall aquarium. How deep should the water be?

Freshwater turtles need a platform to bask on. It allows them to regulate their body temperature and dry their shells. Using a plastic basking platform is the most popular choice.

One of the most popular turtle basking platforms is the Penn Plax Turtle Tank Topper – Above-tank Basking Platform. For a more natural-looking basking platform, you can use natural habitat rocks.

As with any aquarium, you need a water filter and pump. A submersible canister water filter such as the Fluval U2 Filter should be good enough for a single adult turtle in a 20-gallon aquarium.

For a pair of adults in a 40-gallon aquarium, I recommend the Fluval U3. This should be good enough. Besides a filter, you need to change the water regularly. Change about a third of the water every week

With housing arrangements, you can keep a male and a female in the same enclosure but not two males as these turtles can be territorial. Even with a male and female, the male may harass the female. In this case, separate them.

As with other turtles, it is unnecessary to have a substrate. The turtles don’t need it. However, many keepers add substrate to give the aquarium a natural appeal. A good substrate is one that doesn’t dissolve in the water. River gravel such as the Supply Guru River Rocks and coral base rocks such as CaribSea South Seas Base Rock are all solid choices.

Some aquariums even feature photoluminescent aquarium substrates such as the Glofish aquarium gravel.

Maintaining a suitable temperature is necessary for the survival and comfort of the turtle. These turtles require temperatures between 70 to 90 F. It is usually unnecessary to heat the aquarium since the temperature in most rooms is in the right range.

This turtle needs UVB light to synthesize the required vitamin D3. You can use a mercury vapor lamp to provide both the UVB light and the heat needed. A popular choice is the Zoo Med Aquatic Turtle UVB & Heat Lighting Kit, which was mentioned in the previous section. You can also use a fluorescent light to provide the needed UVB rays,

Musk turtles are primarily carnivorous and may not accept plant foods. In the wild musk turtles feed on aquatic insects, amphibians such as frogs, crustaceans, worms, mollusks, and even carrion.

Juveniles eat small prey such as beetles, millipedes, worms and small snails. While adults eat bigger prey and would even feed on clams. Occasionally, musk turtles will consume plant food such as duckweed and waterweeds (Elodea).

An excellent food choice is commercial turtle diets. Now only are these convenient, they provide the turtle with all the needed nutrients. For hatchlings and juveniles, the Zoo Med Natural Aquatic Turtle Food (Hatchling Formula) is perfect. However, you can always feed juveniles with the same diet you would feed an adult with. Tetra Reptomin Floating Food Sticks for aquatic turtles works for both adults, and juveniles.

They also accept other live prey such as mealworms, bloodworms, crickets, trout chow, and shrimp. Variety is good as it enjoys the turtle doesn’t become fixated on just one food type.

You can find these foods in most pet shops. You can also have insect farms. These are useful when you need to feed several reptiles and amphibians. Sequoia Aquatic Turtle Medley Food contains freeze-dried mealworms and shrimp are readily accepted.

Simulate feeding by providing live prey. However, if the turtle accepts commercial turtle foods, these are highly recommended as they contain all the needed nutrients. Nutrient deficiency can be a huge problem with captive-bred reptiles.

Feed hatchling every day, and pre-adults every other day. Feed adults thrice or even twice a week. Feed them as much as they can eat within 5 minutes. Feeding your pet turtles is a great way to bond with them. It is an enjoyable activity for most turtle keepers.

Feeding them wild prey and food is not the best as they may contain harmful insecticides and pesticides.

Turtles aren’t the most interactive pets. Because common musk turtles may attempt to bite when handled. You need to be careful when handling them.

Ensure your fingers are at the rear of their shell to avoid being bitten. Another name for the common musk turtle is stinkpots because of the foul smell this reptile emits when threatened. After handling the musk turtle, wash your hands properly since they may carry salmonella.

While there are several musk turtle species, the ones that make ideal pets include the common musk turtles and the razorback musk turtles. They are also the easiest to breed. As they live long, they require a lifelong commitment.

Musk turtles are strong turtles that are disease-free. Here are some health concerns to be ary of.

Signs to look out for include loss of appetite, unresponsiveness to stimuli, presence of cuts, bruises, blisters, and sores, foul-smelling mouth with thick mucus, and swollen eyes that aren’t clean and clear.

When adopting a musk turtle, do so from a reputable breeder or a rescue organization. Ensure the turtle is not under 4 inches in carapace length. You can find musk turtles in many pet shops and even online.  They cost between $20 to $70.

On the IUCN Red List, all the species of the genus Sternotherus are listed as of least concern except the flattened musk turtle which is critically endangered.

The main threat to the flattened musk turtle is strip mining which heavily pollutes the habitats of the species. Conservation actions proposed include local efforts to improve the water quality of the species natural habitats, and the enforcement of mining laws and regulations.

The common musk turtle is one of the most loved turtle species. This is because they are easy to care for and are small. Endemic to the east coast of North America, they are easy to find in most pet shops that have turtles available.

Although they are tiny reptiles, musk turtles are long-lived and can easily live to be 50 years. They can also be aggressive and may bite when threatened. If you have any questions, or extra information about the musk turtle, kindly leave a comment.

How To Clean A Turtle Shell