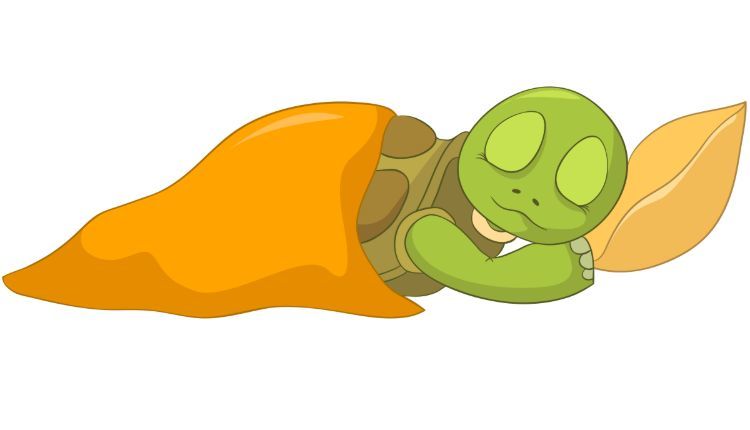 Turtles like any other animal need to rest. Most pet turtles are diurnal and as such sleep at night. To ensure the turtle sleeps well, turn the lights off during the evening.

This follows the natural cycle of the day. This cycle must be maintained without fail every day.

Additionally, the water conditions must be right as many turtles sleep underwater (this is true of most North American terrapins). A healthy turtle sleeps well.

A turtle that doesn’t sleep well ends up stressed. This can affect the turtle’s appetite and health.

Regardless of where your turtle sleeps, it will need to breathe every now and then.

As you may already know, some turtles such as the red-eared slider and the painted turtle can go several hours (about 5 hours) without breathing.

There are some species such as the box turtle, that doesn’t sleep in water. Box turtles are terrestrial and as such do not need an aquarium. Box turtles need a dry terrarium.

Sea turtles also sleep underwater. In all, the sleeping patterns of aquatic turtles are very different from other pets.

Most aquatic turtles sleep underwater for 4 to 7 hours. During this time, the turtle will surface for a moment, replenish their air supply and resume their sleep.

In the wild, freshwater turtles such as the map turtle bury themselves in a marshy patch of grass or moss to sleep.

Additionally, North American turtles such as the musk and painted turtles can even breathe underwater. They can remain perfectly still underwater as they sleep.

Since the oxygen level in the water is important, you should ensure it is high enough.

If the tank is large enough and you use a water filter/pump, you can rest assured that there is enough oxygen in the water for the turtles during sleep.

Where do water turtles sleep?

Turtles usually find a particular spot that is comfortable and use it as their permanent sleeping spot.

As such, you may notice that your turtle sleeps at the same spot night after night. This is not always the case, as many turtles also change sleeping locations from time to time.

Do turtles sleep in water?

When do turtles sleep?

Most pet turtles are diurnal and as such sleep at night.

A few species such as the common snapping turtles and stinkpots (Sternotherus oderatus) are actually nocturnal.

As nocturnal turtles, they sleep during the day and are active at night. However, most pet turtle species including sliders, map turtles and cooters are diurnal.

The main reason why turtles are diurnal is because of their need for UVB. The only time to receive UVB is during the day.

Even diurnal turtles tend to take naps during the day while they bask.

How long do turtles sleep?

Turtles don’t experience deep sleep as humans do. A turtle’s sleep is more of a long rest within which they must come up for air several times a night.

Aquatic turtles can be underwater for 4 to 7 hours, only bobbing their head above water to breathe.

Turtles can stay submerged for so long because of the low water temperature (around 70 to 75 degrees Fahrenheit).

Tortoises, on the other hand, can sleep for much longer. Several land turtle species, such as the Galapagos turtle, can sleep for 16 to 18 hours every day. They are asleep more than they are awake.

Do not worry about your turtle drowning while it sleeps since it can go several minutes to hours underwater without breathing.

When the turtle needs air, it will automatically resurface. The turtle will only drown if it gets trapped underwater. Ensure there are no obstacles to trap the turtle.

For baby turtles, ensure the water level is not too high. The baby turtle should be able to resurface without fully leaving the bottom. Many experts recommend a water level with is about two and a half times the height of the baby turtle.

Just make sure there are no objects to trap the turtle and it won’t drown.

Why Is My Turtle Always Sleeping?

Turtles generally rest a lot even when they aren’t asleep. However, excessive inactivity is often down to temperature.

As such if the temperature in an aquarium is too low, you may find your turtle sleeping more than usual.

In the wild, turtles sleep more as winter approaches and temperatures drop. If this is the case in your captive enclosure, increase the water temperature.

There are thermometers, such as the Jcreate Digital Touch Screen Fish Tank Thermometer, that monitor water temperature from the outside of the glass panel.

If the water temperature is low, then get a water heater. The heater must be regulated with a thermostat so you don’t end up cooking the turtle alive.

Submersible water heaters like the Orlushy Submersible Aquarium Heater are particularly essential during the colder months.

Even with the appropriate temperatures, expect your turtle to be more lethargic and to eat less during winter. Check with your herp vet if you’re worried.

Older turtles tend to be less active than juveniles. As your turtle grows, expect it to slow down and to be more inactive.

Hibernation (or brumation) is determined by the temperature of the turtle’s environment.

In winter, food is difficult to come by. Additionally, because of the cold, the turtle cannot actively search/hunt for food.

It is important for wild turtles to preserve their energy and hibernate/brumate through the cold months.

Also turtles endemic to temperate zones of the world, such as North America, brumate.

Pet turtles don’t need to preserve energy since food is provided by their keepers. Also since keepers regulate the temperatures of the enclosure, pet turtles needn’t prepare for cold temperatures.

There are benefits to hibernating your turtle, but it comes with risks. When conditions are not properly monitored, it can lead to the death of the turtle.

If you don’t want your turtle to hibernate keep temperatures high. The water temperature needs to be between 70 and 80 degrees F.

During winter, you may need a water heater to achieve the desired water temperatures.

The temperature of the basking spot must be 85 to 95 degrees F. During the cold months, bring outdoor turtles inside where the temperature is high.

Brumation, however, increases odds of breeding success and is the most important part of the cooling period which usually happens from November to February.

Unless you plan on breeding your turtles, there is no need to force them into hibernation. When not done properly, it can lead to starvation, drowning or freezing.

Here are some few steps to take if you plan on hibernating your pet turtle.

Once again, pet turtles don’t need to hibernate. However,  brumation/hibernation may be triggered when temperatures are below 50 degrees F.

If you want to breed your turtles, then they need to hibernate. Ensure the conditions are right and take all the necessary precautions.

Turtles love to sleep. Land tortoises and land turtles can spend the majority of the day sleeping. Aquatic turtles usually sleep underwater, although some sleep on dry land (such as the basking platform).

Regardless of where your turtle likes to sleep expect it to pick a spot and stick to it. Turtles generally sleep for about  4 to 7 hours each night.

They may also rest in their basking area for long hours. Even when they sleep expect them to wake up frequently to breathe. If your turtle is sleeping too often, it is usually down to the water temperature.

Cool waters with temperatures close to 50 F drastically reduces the turtle’s body temperature forcing it to enter brumation mode. Keep temperatures at the optimal levels and the turtle should rest as normal.

Additionally, the older the turtle gets, the more it sleeps. If you have any questions or additional information to add, kindly leave a comment. Thanks.