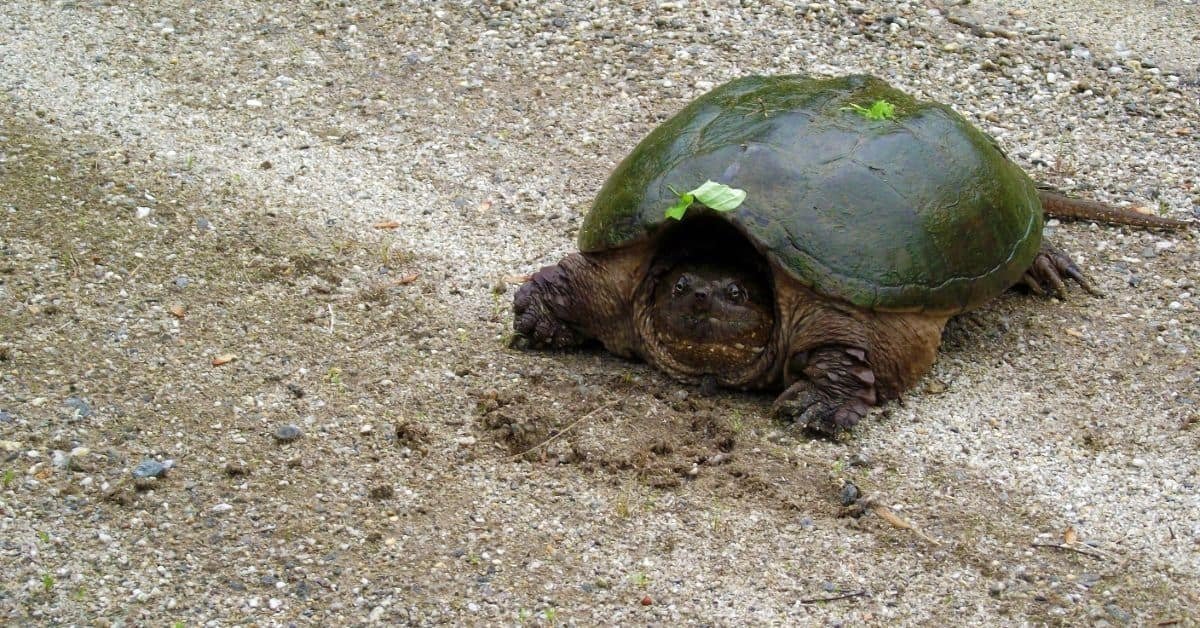 The common snapping turtle is a large North American freshwater turtle that can live up to a 100 years. As pets, they are relatively easy to care, but they require a lot of room and a long-term commitment.

While timid and gentle underwater, these turtles are aggressive and combatant once out of water. They are called snapping turtles because of their habit of snapping at anyone who tries to hold them.

Also known as the common snapper, this species is also the state reptile of New York.

Scientifically, this species is called the Chelydra serpentina. Their specific name, serpentina, perfectly describes the ability of this turtle to stretch and move their very long flexible neck in a serpentine manner.

The common snapping turtle is closely related to the alligator snapping turtle. Both turtles are prone to snapping when picked up. They also both belong to the family Chelydridae.

These large turtles have an average shell length of 8 to 18.5 inches, although they have been known to grow to lengths of over 20 inches.

A noticeable feature of this species is its saw-like tail, which is almost as long as its shell is. While you may be tempted to pick the common snapper up by the tail, it is a bad idea as doing so can damage the turtle’s spine.

The color of their shell is tan to blackish brown. The species has a small plastron that covers little of the turtle’s extremities. The head is dark in color like its shell while the limbs and neck are yellowish.

While these turtles can live up to 100 years, they have an average lifespan of 30 years in the wild and 47 years in captivity. They are most vulnerable as juveniles. Once they attain a certain size, few predators can harm them.

Species similar to the common snapping turtle include the alligator snapping turtle (Macroclemys temmincki). Shell appearance is the easiest way to distinguish between these two similar turtles.

In the wild, the common snappers are omnivorous and eat anything they can fit their jaws around. They feed on aquatic vegetation, amphibians, fish, invertebrates, carrion, small mammals and birds.

They are even known to kill other turtles. As you can tell, it’s not advisable to keep them in the same habitat as other turtle species.

Since they are easy to feed, foods such as bloodworm, freshwater fish, shrimps, snails, cooked lean meat, crickets, mealworms, and earthworms are all great additions to their diet.

They will also accept fruits and vegetables. Fruits should not be the staple food of this species. They must only be given as snacks.

Common snapping turtles can be found in North America – from Nova Scotia to South Alberta and extending south to the Gulf of Mexico. They live in freshwater and brackish water bodies such as streams, rivers, ponds, and lakes.

They prefer to live in habitats with abundant aquatic vegetable because it allows them to effectively conceal themselves.

Most pet keepers acquire these turtles as babies. These do not require much room and will thrive in a 20-gallon tank. However, over the years/decades, they will grow to be very large.

There are many owners who decide to release their pet snappers into nearby ponds when they grow too big. This is wrong because snappers are combatant, aggressive and territorial.

When released outside of their natural habitat, they can quickly become invasive species. Also because of their territorial nature, you can’t have more than one snapping turtle in a tank/pond.

Adults with lengths of 8 inches and more need large aquatic setups. Plastic tubs such as Rubbermaid and stock tanks can house adult turtles. 50 to 300-gallon tanks will work well for adults.

Ensure that the tanks have wire mesh lids with strong wooden frames so these turtles cannot escape their enclosure. This also keeps unwanted visitors out.

Tanks for young snappers can have submersible pumps but for large common snappers, an external canister filter is needed. You can also keep these turtles in backyard ponds. Ensure the pond is securely fenced with grip-free material.

These turtles do not like to bask. They prefer to float on the water surface instead of basking. You still have to provide a basking site as well as UV light if they are kept indoors.

These turtles are not susceptible to any particular health issues. Most medical problems are caused by poor water quality and incorrect turtle husbandry.

Ensure that the filtration system provided is strong enough to keep the water clean. The habitat also needs to be free of any sharp edges that can harm the turtle.

Also, ensure your turtle gets are all the needed vitamins and minerals. Supplement their diet with vitamins and calcium if necessary.

Health issues include lethargy, decreased appetite, watery eyes, and runny noses. These are usually symptoms of a respiratory infection. Contact your vet, if you notice these symptoms.

Algae growth on this large turtle’s shell has to be cleaned regularly. While the alga isn’t harmful, they hide infections and injuries. Use a soft brush and clean tepid water to wash the shell.

Always check for cuts, rots, and injuries on the shell. You can treat cuts and cracks with a topical iodine solution. If injuries aren’t improving after a few days, do well to contact your vet.

The eggs and hatchlings of the snapping turtle are particularly susceptible to predators such as largemouth bass, predatory fish, water snakes, foxes, skunks, raccoons, crows, and even larger turtles. Once they are bigger, they have few to no predators. These large turtles fight back when attacked.

The common snappers are not engendered or even threatened. As per their name, they are common. Destruction of habitat may adversely affect wild populations in the future, but as of now, it has little impact on the species.

While they are hunted for food, this doesn’t seem to have any negative influence their populations across North America.

They are long-lived and grow big. As such, if you plan to acquire the common snapper, ensure that you are ready to provide a lifetime of care. In all, the common snapping turtle is an interesting and active turtle.

Turtle enthusiasts will find that caring for a common snapper provide a unique and rewarding experience. If you have any comments on this turtle, we would love to read them!