The Reeves turtle, also known as the Chinese pond turtle belongs to the family Geoemydidae and is native to Asian regions like China, Japan, Korea, and Taiwan. Their family was called Bataguridae until it changed to Geoemydidae.

Their scientific name is Mauremys reevesii, and they are also known by an additional name of the Chinese three-keeled pond turtle.

The average lifespan of the Reeves turtle ranges from 10-15 years on the average. Studies have shown that with proper diet and care they have even lived up to 20 years.

These small sized turtles are most commonly 6 inches in total. At times the larger form of these turtles can reach up to 9 inches in size. The females achieve a larger size than the males when they reach their adulthood.

The carapace of Reeves turtles is slightly more rectangular in shape than the regular round shape.

The carapace customarily displays an array of olive green color which varies from a darker tan color to even black at times.

The shell can be crème, yellow or tan with blotches that are a darker shade of brown or black on the bony scales.

Where is the Reeves turtle found?

Originally from China, these turtles are primarily found in Eastern Asia and their range spans China, Korea, Japan, and Taiwan. They are also known as the Chinese pond turtle or Chinese three keeled turtle.

They are pond turtle that prefer sluggish waters with soft bottoms, abundant aquatic vegetation and plenty of basking sites. They have also been found in marshes, swamps, and even rice paddies.

Waddling pools or Koi ponds make excellent Reeves turtle habitats for they are not the best of swimmers.

They are omnivores that enthusiastically feed on both plants and animals. They are especially fond of worms, small fish insects in addition to green leafy vegetables.

Most of the commercially available turtle diets as well as catfish foods make great foods for Reeves turtles. Calcium supplements are essential to these reptiles that grab and tear large food pieces with their front claws.

However, food in high oxalic acids such as spinach and beet leaves should be avoided.

In spite of their protective carapace, the Reeves turtles are largely housed in predator proof places to keep them away from carnivorous pets such as cats and dogs and protect them from possums and raccoons or any other predators.

The female Reeves are astonishingly inventive when it comes to breeding, despite their small size. They are extremely captivating and desire a mate that is amiable. In the northern hemisphere, the breeding season begins in spring and follows through to the middle of summer.

The cluster of eggs laid primarily ranges from 2 to 6 eggs, depending adequately on the size and fertility of the female. Larger females, who are most frequently 9 inches in size, lay larger eggs.

The females lay eggs on land, in nesting burrows that are most likely muddy or sandy. They leave the eggs to incubate for about 50-80 days in total. After hatching the young tortoise must survive by themselves.

The hatchlings are weak swimmers though they are almost exclusively aquatic; they should be housed in water less than 2 inches deep to reduce their susceptibility to drowning. Floating plants – live or plastics greatly improves the survival chances of hatchlings.

The hatchlings are more omnivores compared to the adults, who eat more vegetable content, and in addition to pellets, ravenously consume worms, insects and thawed frozen fish. It is important to feed hatchlings at least once in day and caution must be exercised to avoid over feeding them.

In this video you can see a nice setup for a Reeves Turtle someone has made. We hope that this gives you some inspiration on how to make a home for your new friend.

While handling Chinese pond turtle hatchlings, they should be fed at least once a day, but cautions should be taken about overfeeding them. Only feed them enough that could be finished in 5 to 10 minutes.

Here is a review of the best UVB bulbs for turtles to help you in choosing the lighting setup.

An adult pond turtle is considered omnivorous and therefore can feed on plants and animals. These turtles feast on anything and are not very picky with food so make good pets. Earthworms, bloodworms, cricket, and feeder fish along with kale and romaine lettuce can easily be fed to them.

They are very energetic and active and love to have a lot of free space for them. Any plastic plants and rocks can require places for them to hide and climb.

Reeves Turtles make great pets. Thesee palm-sized turtles are inquisitive, and their social nature makes them a perpetual favorite among many a turtle enthusiasts despite their lack of vivid colors.

Their delightful nature and pleasing appearance make them an excellent choice of pets to roam your house.

Let us know your thoughts in the comments below! 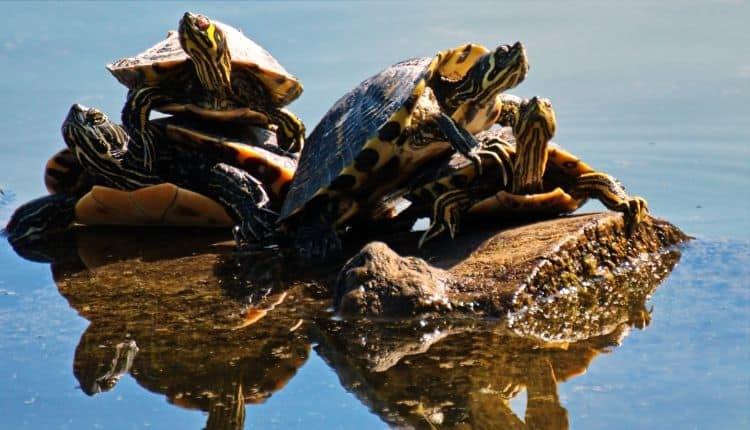 Id love to ad this turtltle forn my turtle santcuary