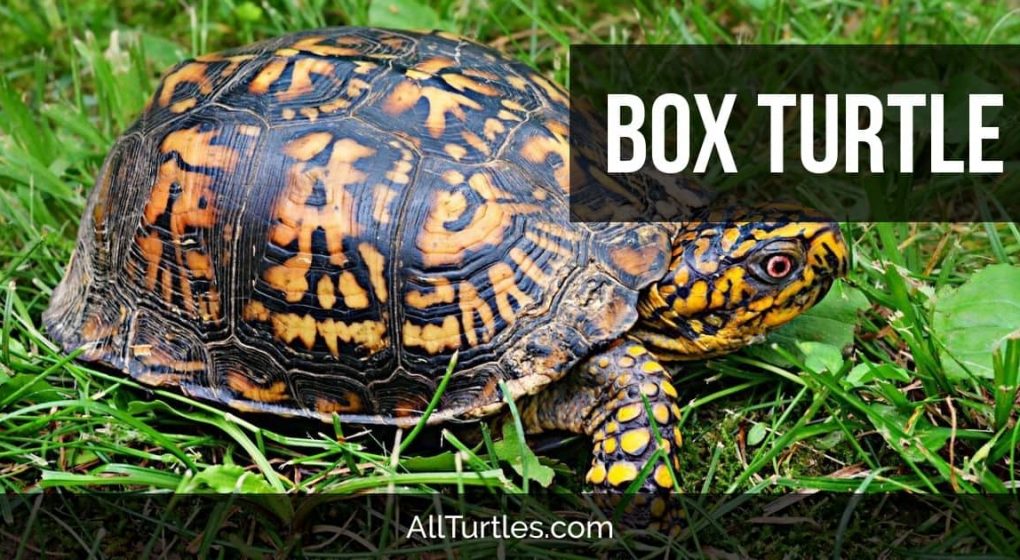 The Box turtle is one of the best turtles to keep as pets. While there are several box turtle species in existence, the one commonly kept as pets is the eastern box turtle, also known as the common box turtle.

This terrestrial turtle is easy to care and doesn’t require an aquarium. They are easy to feed and hardly ever suffer any health issues.

This timid creature is native to both the United States and Mexico, though there is an Asian species of box turtles living in the Eastern region of the globe.

Box turtles are easy-going reptiles whose needs in captivity are highly complex, though this does not stop animal lovers from making them common pets.

Because most wild turtles live in climates that have a wide range of temperatures, they need to hibernate three to five months out of the year in order to stay alive.

During these cold temperature spells, food is not as plentiful and the weather does not permit normal bodily functioning.

It is during this time turtles tuck themselves tightly into their uniquely hatched shells and stay sheltered until spring. While some may assume this is a safe period, it is actually quite dangerous.

The common box turtle is probably the most popular box turtle species kept as pets and the species that usually comes to mind when box turtles are mentioned.

The eastern box turtle which is the nominate subspecies is widely kept as pets, and so is the three-toed box turtle.

The common box turtle has a high dome-like carapace and a hooked upper jaw. Common box turtles are generally brownish to black in color with yellowish or orangish patterns of lines and blotches. The three-toed box turtle also has three toes on the back feet.

The Coahuilan box turtle is the only member of the genus Terrapene (box turtles) that spends almost all its time (90%) in water.

The Mexican box turtle looks very much like the three-toed box turtle. It has a dark carapace and dark skin. Sometimes, you can find yellow markings on the carapace.

The species name is Terrapene nelsoni. The specific name is in honor of Edward William Nelson, a great American biologist.

The western box turtle is a relatively popular turtle. You can find a few of these box turtles as pets. Their shell is much flatter than other box turtles.

They are usually dark brown to black with bright yellow stripes. The desert box turtle has more stripes than the ornate box turtle.

Ornate box turtles can be found in Louisiana, eastern Texas, and western Indiana.

The Yucatán box turtle is endemic to the Yucatan peninsula. As an endemic species, they can be found in this singular region.

Also, the Yucatán box turtle is a species on its own, it is sometimes treated as a subspecies of the common box turtle.

The Yucatán box turtle is very rare in the United States so don’t expect to find one.

Asian box turtles belong to the family Geoemydidae and the Genus Cuora which includes 12 species.

This particular species is characterized by the dome of its shell, from low to high. Three kneels on the carapace are usually the markers which are used to distinguish these turtles.

Both the Chinese box turtle and Malaysian box turtle belong to the same family and have similar traits.

These box turtles are known for their hardiness and can make great pets.

The aquatic box turtle even prefers an aquatic environment. Regardless of the box turtle, a humidity level of about 60 percent is recommended.

Box turtles are best housed outside as long as the temperature doesn’t fall below 50 degrees Fahrenheit. If you have space I strongly recommend this. Box turtles don’t need a large enclosure to be comfortable.

An enclosure that measures 4ft by 4ft should be a large enclosure for the turtle. The walls of the enclosure should be about 18 inches high with an overhang.

Additionally, the wall should be about 10 inches underground to prevent the turtle from digging out.

If you are unable to keep the box turtle outdoors all year round get a tortoise table or a terrarium that has a capacity of at least 40 gallons.

Because the enclosure needs to be moderately humid, use a substrate that retains moisture well. I recommend an equal mix of sphagnum moss, peat moss, and dampened topsoil.

Other substrate choices include coco coir, eco earth and even aspen shaving. The substrate should be about 4 inches deep.

Some turtle keepers recommend that you avoid sand or any gritty material as it can cause intestinal impaction.

If you are housing them indoors, you need to provide both a uvb source and a heat source.

The Zoo Med Aquatic Turtle UVB & Heat Lighting Kit is a great choice since it has the capability to house dual bulbs covering both heating and UVB and it includes the bulbs in the purchase.

As you can see, the enclosure needs to be large for this temperature gradient to be created.

Consider installing thermometers at both the cool end and the warm end to monitor the temperatures within the enclosure.

Similarly, you can use a single thermometer to check the temperature regularly. This is very important if it’s your first time caring for a turtle.

Sunlight is the best source of light for the turtle, but for when the box turtle is housed indoors, you need to provide uvb lights for the turtle.

As mentioned above the Zoo Med Aquatic Turtle UVB & Heat Lighting Kit is a great fit for that.

The lights should be on for no more than 10-12 hours a day. You can use a timer to manage that as well.

As already mentioned, the turtle requires a humidity level of about 60 percent.

Use a humidity gauge such as the  ThermoPro TP50 Digital Hygrometer to monitor the humidity. Also mist the enclosure with potable chloride free water twice to thrice a day.

You can do that manually of get a misting system.

Box turtles are omnivores and eat a mix of plants and meat. When kept outside they will even forage for food. Having some edible plants in the enclosure provides both nourishment and shade.

The box turtle diet needs to be 60 percent animal protein and 40 percent plant matter. Feed them vegetables, fruits, insects and low fat meat. You can also give them commercial turtle diets in addition to fresh food.

Vegetables to feed them include collard greens, dandelion greens, romaine lettuce, flowers. Duckweed and many others.

Fruits to feed them include pears, apples, raspberries, strawberries, and blueberries. Offer fruits once a week.

Feed the turtle daily. Provide as much as it can eat. Over time, you will get to know exactly how much they eat. Feed them on plates or other clean surfaces free of debris so they don’t ingest debris.

Always provide a shallow box of clean water at all times.

Box turtles are docile and easy to hold. They don’t bite and are much more tolerable than other turtles. However, it is still best to handle them only when it is necessary.

Frequent handling can stress them out. Feeding time is also one of the best ways to bond with box turtles. Most box turtles can recognize their keepers over time.

Box turtles are capable creatures that can go most of their entire life free of any serious health complications.

This disease can lead to death.

Respiratory infections – This usually caused by insufficient humidity or vitamin A deficiency.

Signs of a respiratory infection include lack of appetite, difficulty breathing, lethargy and presence mucus from the mouth and nose.

Shell rot  – Another common affliction is shell rot. The shell may appear cracked or dey and emits a bad smell. This is usually caused by inadequate heating.

Signs that generally show that your turtle is unwell include blisters and sores, foul-smelling mouth with thick mucus, loss of appetite, cuts and bruises,  swollen unclear eyes, and unresponsiveness.

Most box turtles are not endangered. The aquatic box turtle (Terrapene coahuila)  is the only endangered box turtle. This is due destruction or modification of their natural habitat.

The aquatic box turtle is included in CITES Appendix I and protected under  Mexican wildlife and natural resource legislation.

There are many species of box turtles and all but one are land-based turtles. This is odd as pond turtles are generally aquatic or semi aquatic.

The most popular box turtles include the eastern box turtle, the three-toed box turtle and the desert box turtle.

If you are looking to adapt, the easiest to obtain is the eastern box turtle and the three-toed box turtle.

Caring for box turtles is much simpler than caring for many other turtles as box turtles do not require an aquatic setup. If you have any questions or information, leave a comment.

Can A Turtle Drown

By Will Bruce
About the author