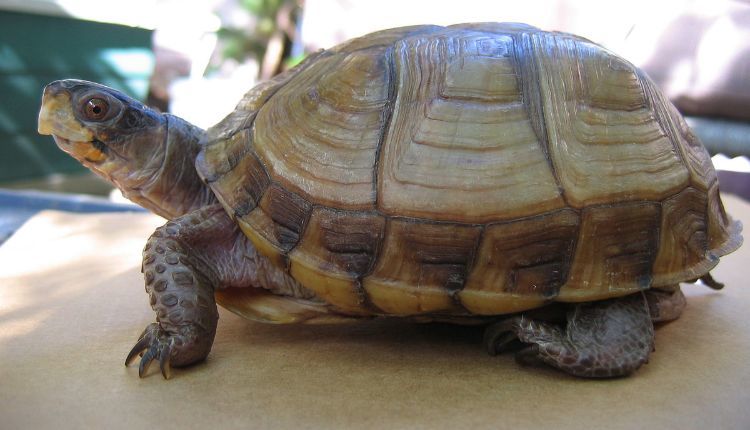 The three-toed box turtle is one of the easiest pet turtles to care for. They live long and are easy to feed. While they are pond turtles, they spend most of their days on land.

If possible, I advise that you house these turtles outdoors. Not only does this cut down cost, but the outdoor enclosure allows the turtle to receive sunlight, which is the best source of UVB light radiation.

The Terrapene carolina triunguis can be found from eastern Texas to the northmost part of the Florida Panhandle. The species can also be found from southern Missouri and southeastern Kansas to Louisiana.

It is not uncommon to find hybrids of the three-toed box turtle and other box turtles. These hybrids are difficult to differentiate from the common box turtle.

The three-toed box turtle can also be found outside its geographical range, where specimens of the species have been released by pet keepers. They can be found from sea level up to 4,300 feet (1,300 m).

The three-toed box turtle is about the same length as the eastern box turtle, but with a much narrower carapace. Their carapace is olive or tan with dark seams and vague markings. Their plastron is yellow in color. While the males have red-colored heads, the females have red, orange or yellow spots on their heads.

Similar to the eastern box turtle, the three-toed box turtle inhabits humid areas such as marshy meadows and grasslands. They prefer areas with high humidity levels and easy access to shallow waters such as streams and ponds. These hardy turtles can, however, adapt to a wide variety of habitats.

The three-toed box turtle is best housed outside in large naturalistic pens with a shallow pond. This is where they are most comfortable. The enclosure needs to be at least 6 sq ft in size.

However, with these turtles, a bigger enclosure is always better. The walls of their outdoor enclosure need to be at least 20 inches tall and extend at least 12  inches underground to stop the turtle from burrowing out.

There are several materials you can use to construct the walls. Regardless of the material used, it has to be rot-resistant. Cinder blocks work really well.

The turtle must have access to the sun and shade. This allows it to regulate its body temperature. Use dwarf fruiting trees, small hollow logs, and even small shrubs to provide shade.

You can also house these cute turtles in an indoor enclosure such as a turtle table or a reptile terrarium. Because they aren’t the largest of reptiles, a 30-gallon tank should do.

These turtles do well in a humid environment. As such, use substrates that retain water well. Try mixing milled peat moss or coco coir with topsoil or sphagnum moss. This bedding allows them to dig. Ensure the bedding is about 2 to 5 inches deep.

Also, provide flat rocks for the three-toed box turtle to walk on. This keeps their claws trimmed.

It is important to maintain a temperature gradient with a cool side of 70 F and a warm side of 80 F. In addition to this, you need to provide a basking area with a temperature of 85 F.

Don’t attempt to heat glass enclosures using sunlight as the entire enclosure can easily overheat as glass is a good conductor of heat.

If the turtles are housed outdoors, you won’t need to provide artificial heat sources. However, when the temperature falls drastically, you can use mercury vapor lamps to provide supplementary heat.

This light allows the reptile to synthesize vitamin D3 which is needed for the metabolism of calcium. If your three-toed box turtle is housed indoors, you need to provide the needed amount of UVB radiation through the use of artificial lighting.

The Zoo Med Reptisun is an excellent UVB light choice. You can also use mercury vapor light. These provide UV light as well as heat. Care needs to be taken when using mercury vapor bulbs so as not to overheat the enclosure.

Dehydration is a major health problem among land turtles and should be properly dealt with. Ensure the enclosure is humid. For outdoor turtles, provide a shallow pan of water.

Pans you can use include roller paint pans and plant saucers. Adult turtles will occasionally enter the water to hydrate and cool off.

For turtles that refuse to use the pans, submerge the pan in substrate/bedding so its level with the bedding or ground. You may need to place hatchlings and juveniles in the water several times a week for about 10 minutes.

For turtles housed indoors, ensure the humidity in the enclosure is about  65 percent. Mist the enclosure twice or even thrice daily, if necessary. With the help of a hygrometer such as the ThermoPro TP50 Digital Hygrometer, you can maintain the right humidity levels.

The water used needs to be chloride-free and potable. When using tap water, allow the water to sit overnight to dissipate the chlorine in the water.

When received as hatchlings, it is imperative that you offer them an assortment of foods so they don’t become fixated on just one food item. A healthful mix of food ensures that the turtle gets all the needed nutrients.

As they are omnivores, feed them a mix of animal matter and plant matter. Generally, they aren’t picky and accept a wide range of foods.

Their diet should be composed of 60 percent animal matter and 40 percent plant matter. Feed hatchlings and juveniles once every two days, and feed adults twice or thrice a week.

Animal matter to feed them include earthworms, mealworms, superworms, slugs, snails, caterpillars, dubia roaches, and grubs. You can feed them a wide variety of insects. Some keepers also feed them dry cat food or even cooked lean beef. However, it’s best to feed them insects. Feeder insects are easy to find and even farm.

Plant matter to feed the turtles include duckweed, hibiscus leaves, and flowers, dandelion, romaine lettuce and collard greens. As already mentioned, vary the vegetables and plants fed the turtle.

You can also introduce cacti such as aloe vera and prickly pear cacti to the diet. These have high water content which is good. Ensure you remove all prickles before offering the cacti to the turtle.

The foods mentioned should make up the turtle’s main diet. However, in addition to this, you can offer fruits and berries. These should be limited to once or twice every two weeks. You can offer apples, melons, and strawberries.

As with other box turtles, feeding is the best way to bond with your turtle. As the turtle gets used to your presence, it would come to associate you with food. When it comes to feeding, stick to a routine. This allows you to notice any change in appetite.

Ready to provide clean water permanently. Replace the water daily or even twice a day when necessary. (Refer to the section on Humdity).

As with most turtles, the three-toed box turtle doesn’t enjoy being handled. This can be a stressful ordeal to the turtle. Unless when necessary, avoid touching or holding the turtle.

As gentle beasts, the three-toed box turtle doesn’t bite and is generally shy. They may even refuse to eat in your presence and may spend the time staring at you motionlessly.

As with any North American turtle, hibernation is a big deal. You have to prepare for it. You would notice changes in how active the turtle is once the weather gets colder in October and November.

Bring turtles housed outdoors indoors. Place them in a dark and cool place. You can place the turtle in a box and place a single newspaper over it. Don’t cover the box. This box can be placed in a dark room such as a garage.

Check on the turtle regularly as it hibernates. Feed and hydrate it whenever it awakens.

The long-lived box turtle can grow to be 120 years and more. Their exact lifespan is unknown. In captivity, they generally live much shorter. Expect your turtle to live to be 40 years.

As they live long, some keepers may have to give them up when relocating. Keepers may even pass before the pet does. In such situations, it isn’t best to release the turtles into the wild. It’s best to find a new home for them.

There are several illnesses and diseases that affect this hardy turtle. With proper care and good husbandry, you can keep these health complications to a minimal.

Parasites such as roundworms is a huge concern. Turtles with nematode parasites may become lethargic, lose weight, lose appetite and experience runny stools.

Have a veterinarian doctor diagnose and offer treatment.  Parasitic flies are another concern to watch out for. They lay eggs on the turtle’s shell and skin.

In case of wounds with maggots, pluck off the maggots and clean the wounds with betadine solution. After that, apply an antibiotic ointment.  Do this every day until the turtle is healed.

This is a major problem when it comes to box turtles. Although they require a terrestrial set up, they need adequate hydration. A dehydrated turtle usually retracts deep into its shell.

Also, the skin loses its elasticity. Soak a dehydrated turtle in shallow water for several hours. Follow this up with daily soaks of about fifteen to twenty minutes thrice a day.

Ensure that health hydrated turtles soak in the water provided them. For baby three-toed box turtles, place them in shallow tepid water for about 10 minutes every day.

These common turtles can be found in many pet shops. They are especially popular in Arizona. When acquiring a three-toed box turtle ensure that it is captive-bred. Captive-bred are easy to care for. You should expect to pay between $140 to $430 for captive-bred specimens.

The three-toed box turtle has a NatureServe status of Secure (T5). Similarly, the species (T. carolina) is considered to be of least concern on the IUCN Red List. This means that their population is thriving.

Regardless of this, the main threats to this subspecies include highway mortality, habitat loss/environmental degradation, and collection for the pet trade.

As one of the more popular turtles kept as pets, the three-toed box turtle is one of the easiest turtles to care for. They are well behaved and highly adaptable.

With that being said, it is essential that you adopt a captive bred specimen. Secondly, build the turtle an outdoor enclosure. This gives it access to sunlight and is most comfortable for the turtle.

Lastly, it is important to keep in mind that, this turtle is a long-lived species. You need to be committed before adopting one. Kindly leave any comments, remarks, and questions you have. Thanks.

Can Turtles Live With Fish & Other Turtles?