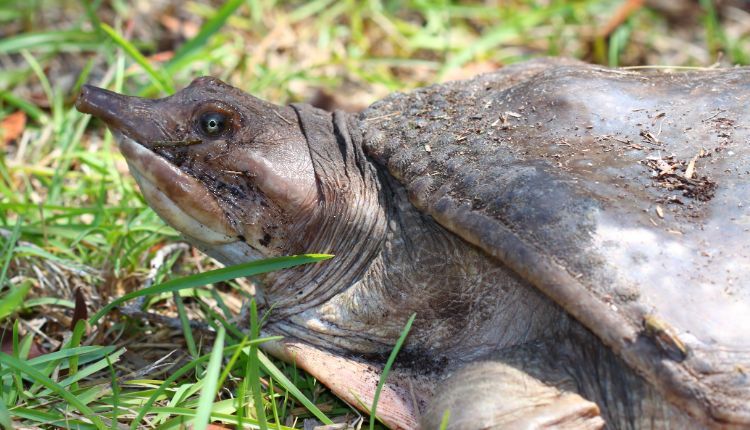 The Florida Softshell Turtle is a species of softshell turtle native to the eastern United States, primarily in the state of Florida. It is the largest of the New World softshell turtles (which are all believed to have originated in the Old World).

The adult softshell turtles typically have dark brownish-green to tan shells with blotches on their skins and sometimes the shells. The shells are covered with skin and are soft around the edges. They are strong swimmers and thus do well in deeper water habitats.

The Florida softshell turtle ranges on the southern South Carolina to Mobile Bay, Alabama from southeastern lower Coastal Plain. They are found in a wide variety of freshwater habitats including ponds, lakes, rivers, canals, swamps, and suburban/ urban stormwater ponds.

They prefer slow-moving, shallow water with abundant aquatic and soft bottom vegetation. The softshell turtle will readily migrate over land to nearby wetter areas if their wetland dries.

The Florida softshell is carnivorous and feeds on insects, snails, crustaceans, amphibians, and fish (live and dead), as well as aquatic plants and algae.

They hunt and chase down prey as well as scavenge. They burrow into the mud near a bank or shore, extending the snout to the surface for air and wait for frogs, fish, and small crustaceans.

The female softshell can nest more times annually and lay more eggs in one season than most reptiles. One of the rare purposes for a softshell turtle to leave the water is to lay eggs.

Like most turtles, when the mother is ready to lay, she leaves the water and either finds an existing nest, such as an alligators, or digs a hole in a soft, sandy area near the water.

She will lay anywhere from 10 – 30 eggs at a time. The softshell turtle is a large species, reaching lengths between 28 and 62 cm (11 to 24 inches); females are significantly larger than males.

After a few months, if the egg hasn’t been compromised, tiny hatchlings will begin to crack out of the shells, using their claws and egg tooth to make their way into the world. They generally emerge in August or September and are on their own as soon as they are born.

The Florida softshell turtles are cute, smart, and fun pets to have. Florida softshells may live more than 30 years in captivity. Most importantly, they can grow to be quite large, so it’s important to know how to care for them.