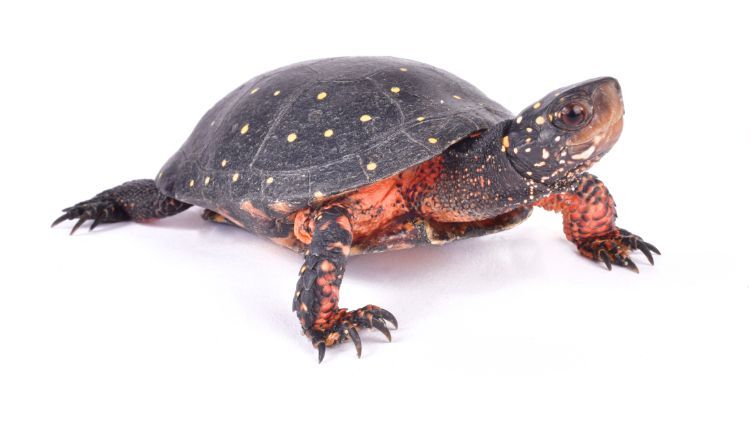 ​​Do they live in Fresh Water or Salt Water?

They can be found in lakes, rivers and streams. Hibernation for the spotted turtle takes place in winter. The ideal place of hibernation is inside mud at the bottom of river bed or lakes.

What is this turtle breed’s Scientific Name?

It comes under the genus Clemnys. This breed was first named in the year 1828 by Ferdinand August Maria Franz von Ritgen. In 1792 anoher taxonomist named it as Testudo guttatai. However, the current scientific name is Clemmys guttata. It is surprisingly the only species alive in this genus.

How long do Spotted Turtles live?

The mortality rate has been steadily decreasing for these species. Their normal life span for spotted turtle is 25 years. It is estimated that they have undergone a drastic a drastic habitat loss of more than 50 percent if not more.

How big do they get and what is their weight range?

What kind of Lighting do they require if kept as pets?

The lighting set up should be such where the turtles feel comfortable in feeding. Photo period of 18:6 is necessary. A heater that supplies 2-3 watt per gallon of water is good for them. The water temperature should be in the range of 65-75 degrees.

What temperatures do they live in?

The painted ones are omnivorous and feed both plants and insects. The juvenile ones feed only on insects. Protein is extremely necessary for these animals as it helps in developing their brains.

The typical insects that they feed on include snails, earth worms, minnows, tadpoles etc. If they are your pets, it is a good idea to give them cooked beef and mutton on occasions.

Their appetite shifts to vegetation as they ages. Typical plant which they survive on includes duckweed, kale leaves, lettuce etc. If you are keeping them at home, you can try feeding them with apples, sweet potatoes, carrots, kiwi fruits etc. It is a good idea to give them a good mix of vegetables, fruits and insects.

Certain restrictions should also be taken. For instance, don’t give them too much of cooked food; It might well affect their intestine. Similarly, do not give them spinach or frozen lettuce. Both are capable of causing nutrition hazards.

What are the best store food brands as a pet?

While you will find many brands specializing in sea foods, it is wise to give them a natural diet such as insects and vegetation.

Where are they found?

Spotted turtles are found in Canada and in certain parts of United States. States such as Arizona, Indiana, New Mexico, and Missouri are home to these species. They are also found in northern and southern region of British Columbia and some part of Fraser Valley too.

What are their breeding habits?

Summer is typically the breading season for them. To be specific June and July are the ideal months for mating. Females lay 10 to 12 eggs on an average. Each egg is around 3 cm in length. The nest is made in a place wherein they are neither close to water body or vegetation.

After the egg laying process, the mothers turtle cove their nest with lose soil and debris. This is done in order to protect the eggs from predetors. The young turtles come out in the month of September-October.

What are their predators?

Typically crows, badgers, foxes, dogs and racoonns are the predator which likes to feed on them and their eggs.

In The U.S, no such status has been stuck on them. Because of their attractive color, many people take them home as their pets and end up killing them due to improper care. This can be told with certainty that their numbers have definitely reduced with time.