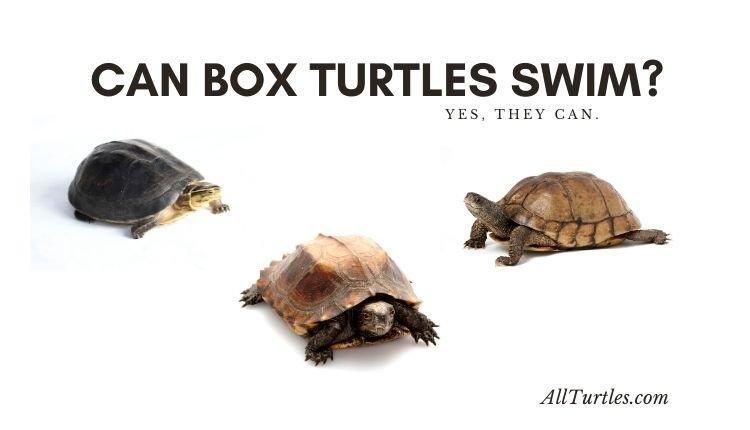 However, with just a little research, you can find out that these turtles actually belong to the family Emydidae which is also referred to as American pond turtles or terrapins.

Other pond turtles (turtles that belong to the family Emydidae) include cooters, map turtles, painted turtles, diamondback terrapins, and sliders.

As you may have already guessed, box turtles are terrestrial and as such require a terrestrial set up. However, can these land turtles swim? Surprisingly, yes, they can. Just not very well.

Apart from the Coahuilan box turtle, they aren’t aquatic and only swim to either keep cool or when they absolutely need to. Box turtles don’t sleep underwater, nor do they spend any significant amount of time in water. However, they can swim.

Can all box turtles swim?

All of the many box turtle species and subspecies can swim when the need arises. Coahuilan box turtles even spend most of their time in water. Bear in mind that they do swim clumsily.

As already established, box turtles aren’t strong swimmers and the trend is set to continue here. For starters, box turtles can only swim for short distances and always in shallow water. After a short time in water, they need to come ashore to rest.

You are sure to almost never find a box turtle swimming underwater unlike other turtles such as cooters, map turtles, and snapping turtles. Box turtles don’t swim underwater because they are bad at it. They can emerge if ever submerged underwater, but they prefer to swim on the surface of the water.

However, box turtles are capable of swimming in shallow waters.

How Long Can Box Turtles Swim?

Box turtles cannot swim for long as its pond turtle cousins, they are not designed to live in water. However, box turtles like to swim and do swim quite often in the wild. These turtles have a wide array of habitats.

Desert box turtles may live in arid areas but the common box turtles live in marshy meadows, floodplains, and other ecosystems with water bodies. The same can be said of the Florida box turtles, which are generally found in damp environments such as swamps, marshlands, and wetlands. These enter water regularly.

Box turtles generally swim if they need to get somewhere or when they need to cool off. They do not spend their lives in water. You won’t stumble upon a box turtle swimming in the middle of a river or a lake, unlike other turtles. However, you can come across them soaking in a small shallow pond.

Box turtles will soak in small shallow ponds of water for long periods of time but they will only stay in any water body deep enough to swim in for a very short period of time.

While they are good swimmers, they are by no means excellent. Box turtles cannot swim as well as sea turtles or other pond turtles. As such, they cannot effectively swim in deep water and can easily drown in one.

However, there is always an exception to every rule. The exception as mentioned about is the Coahuilan box turtle. These turtles can swim in deep water for a long period of time without having to leave the water. They spend over 90 percent of their time in water.

Box turtles, like any other turtle, can drown if they are underwater for a long period of time. However, unlike other aquatic turtles, box turtles usually take less time to drown.

With the exception of the aquatic box turtle (also known as the Coahuilan box turtle), make sure that the water you provide the box turtle isn’t deep enough to drown in. The turtle should be able to stand, head above water, in the tray/pool provided.

How Much Water Does A Box Turtle Need?

While box turtles do look very much like tortoises, they need more water. They also require a much more humid environment. For starters, the amount of water the box turtle needs will depend on the type of box turtle you have. Desert box turtles need less water than Florida box turtles.

If you plan on housing the box turtle in an outdoor enclosure, provide a flat tray of water for it. The turtle should be able to drink from the water tray and soak in it as well. You also need to mist the enclosure regularly, at least twice a day. Maintain a humidity level of about 65% for the common box turtle.

For the Coahuilan box turtle, you need to build an aquarium for it just as you would with any other turtle since it spends a lot of its time in water.

The Coahuilan box turtle may not swim as aptly as other turtles, but they need an enclosure that can hold about 75 gallons of water.

Can You Hydrate A Box Turtle With Tap Water?

As we have already discussed, although most box turtles do not require an aquarium, water and moisture play important roles in their wellbeing. They need enough water to soak in almost daily, and their enclosure needs to be misted regularly. But is tap water safe to use?

Many turtles are susceptible to the chlorine and chloramines found in tap water around the world. These chemicals irritate the turtle’s eyes. It can also leave white spots on the turtle.

As such, it is not the best option. You can provide the turtle with bottled mineral water or distilled water.

For box turtles such as the common box turtle, and the desert box turtle, bottled mineral water or distilled water is a good choice. The turtle will require just a few liters every few weeks.

If you plan on housing a Coahuilan box turtle, you’ll need an aquarium. You can just use tap water for this and condition it with something like API TAP Water Conditioner.

Box turtles are fun pets to have. And unlike other pond turtles, they do not require an aquatic setup. This makes them easier to care for. Regardless of this, box turtles still have water needs.

They prefer a high humidity and enjoy soaking in water. In fact, they enjoy a swim every now and then.

However, unlike other pond turtles, they do not live in water. While they can swim they are not exceptional at it and even lack webbed toes.

Summing up, box turtles are not strong swimmers and should not be placed in deep waters as they can drown. If you have any questions or information, kindly leave a comment.

By the way, what’s your favorite box turtle?

Turtle Eyes (What Can They See & What Issues Do they Have)