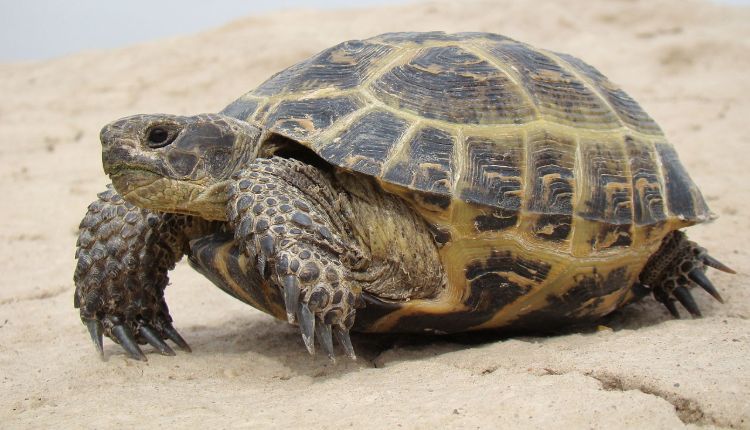 Physical Appearance of a Russian Tortoise

The scutes on the female are flared while the males do not possess any such feature. Other features which help differentiate between a male and a female are their bottom half of the shell the males have a concave bump on theirs which help them to mount the female while copulating.

These reptilians are very small and are sexually dimorphic which means that the females of this tortoise species are slightly larger than the males. At an average, the adult female varies from 8″ to 10″ where as the males are somewhere between 6″ to 8″ with longer tails which are usually tucked sideways .

Lifespan of a Russian Tortoise

They live for about 30+ years and spending a fairly large portion of their life under hibernation. They have an annual hibernation period of about 9 month and are active only during the summers. These creatures are very popular as pets and are mainly imported from Uzbekistan.

Where is the Russian Tortoise found?

Russian Tortoises are found in multiple locations which is why they have various names. Some of their names are Steppe tortoise, Afghanistan tortoise, and even Russian box turtle.

While they can be found in different places, they are native to a territory of Uzbekistan. These tortoises like dry open spaces, so they will be found commonly in sand or deserts. While it’s rare for these to be found in grassy areas, it is definitely not impossible.

Common predators of this tortoise are similar to others and include animals like possums, racoons, dogs, and other similar animals. If you keep them in an outside enclose be sure to protect them from those threats.

While they seem like great pets to be kept at home and many seem to enjoy their company, they are also at a high risk of being endangered. More than 100,000 of these reptiles are being taken from the wild which is soon going to make them extinct. It is suggested to protect these tortoises because without proper care, they will soon cease to exist.

Russian tortoises are vegetarians so they mostly eat plants and vegetables. The best diet for them consists of flowers and leaves. Though it seems very easy to just feed them random flowers and leaves, some of them can have a bad effect on them.

You should not feed them fruits because they can contain high levels of sugars. You will have to be careful with their diet because an improper diet can lead to their death.

They eat many things at one time, so don’t be scared that you are feeding them too much. They are also hibernating animals so in preparation for that they will eat double what they would normally eat.

Make sure to provide a varying diet in order to ensure they receive all the needed nutrients.

There is one important thing you should know , these are hibernating animals and in the wild they would hibernate for about 7 months of the year from October to march.

In captivity however, they usually hibernate around 8 weeks on average. While hibernating the temperature should be maintained between 40-45 degree fahrenheit.

Russian tortoises can start mating at any size or age, so don’t be surprised if your new tortoise starts mating. Females can start laying eggs once they are around 4.5 inches long.

If you would like to breed your Russian tortoises, then it is suggested that you should have at least two to three females and one male in a habitat.

There is a higher chance of success if there are more females. They also need to be well fed and to be healthy before mating.

They will usually mate during the first few weeks after they come out of hibernation. The males will begin the mating by biting the female’s legs and circling around them.

The female tortoise will be ready to lay eggs about a month after fertilization. You will need to provide a proper nesting area for these females.

You will need to put some sand or small pebbles in the nesting area because females like to bury the eggs. The females also become very anxious right before they lay eggs, so there is no need to worry if they avoid food for a few days.

These animals are actually adapted to semi- arid environment and it has an excretory system that eliminates the waste through uric acid instead of urea which proves the theory as uric acid uses much less water compared to urea to expel all the waste material out of the body.

Females also tend to ignore their offspring after laying the eggs. The eggs should hatch within eight to twelve weeks.

These tortoises naturally don’t use the water present in their bladders to expel the urates and are very good at conservation of water in their body. If these animals are deprived of water, their urate levels could rise to very dangerous levels.

So they have to expel these urates as soon as they get a replenishment of water. A thirsty Russian tortoise when provided with water would pee and drink water at the same time.

Here are our enclosure recommendations:

So those were the basic things you need to know about Russian tortoise care and hopefully yours will live a long and slow life i mean a happy life. Ifs you are looking to buy one , its will cost you about 40$ to 50$.