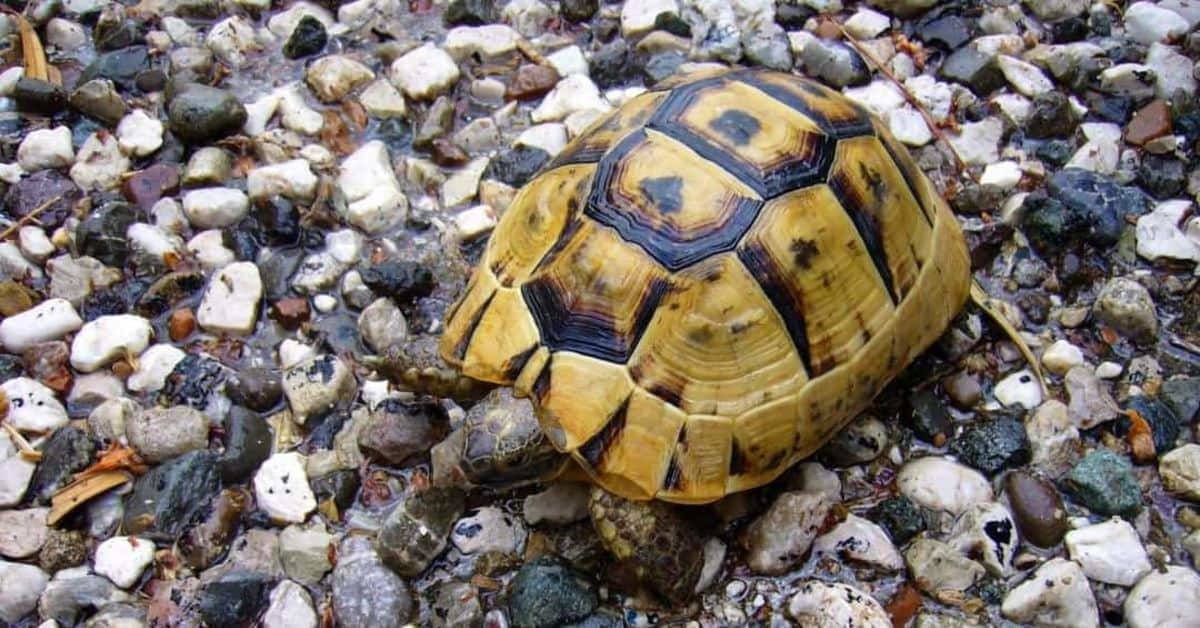 The leopard tortoise is a huge tortoise with markings resembling those of a leopard that is found in eastern and southern Africa. Its carapace that is normally yellow, with each scute having brown centers, has led to it being named the leopard tortoise.

It is the 4th largest tortoise in the world, with average adults being 18 inches tall and weighing 40 pounds. The major difference between the sexes physically is that the male has a longer tail.

Where is the leopard tortoise found?

Favoring semi-arid grasslands, it is mainly found in the savannas, although it can also survive in the rainforests. It has been found in Zimbabwe, Zambia, Uganda, Tanzania, Swaziland, Sudan, South Africa, Somalia, Rwanda, Namibia, Mozambique, Malawi, Kenya, Ethiopia, DR Congo, Burundi and Botswana. They are mainly found near trees, bushes or in holes, places that offer respite from the extremely hot tropical midday sun.

What food does the leopard tortoise eat?

It also consumes shrubs. It is an herbivorous animal, meaning it only eats plants and plant materials for sustenance. It loves feeding on grasses, thistles and fruits of the prickly pear cactus.

It also eats old bones out in the wild for calcium. In captivity, they should be allowed to sustain themselves, with at least 70% of their diet consisting of hay. It also likes the fruits of the prickly pear.

They should be fed with a coarse, high fiber diet with softer and wet foods such as fruit and tomatoes being fed to it less regularly.

The breeding season in the wild usually takes place in the wild. Males will compete for the female by butting each other until one is overturned, after which the victor will approach the female and attempt to mount. Up to 30n eggs are laid in a nest, hatching 18 months later.

Interesting facts about the leopard tortoise

Because the leopard tortoise is so large, and many predators cannot penetrate its high domed shell, it has very few natural predators within its natural habitat of Africa.

Hunters and poachers are the biggest threat to this animal, although occasionally the wild dog and cats may attack it. Its population generally suffers in areas close to large human populations due to over hunting.

Most of the leopard tortoises are not endangered, although some species, such as the Madagascar radiated and Galapagos are on the endangered list.

Buy a healthy tortoise, either from a reptile pet shop, or from a tortoise breeder. It is best to examine the tortoise before making the purchase, by looking at its fecal droppings, which should not be very runny, while the eyes should be glossy and clean and not cloudy.

A leopard tortoise should be kept in an outside environment that tries to mimic its natural habitat as much as possible. This is a grassy area, with places for shelter from the hot sun and other elements. It is advisable to build an outdoor pen for it.

The tortoise should be supplied with two major sources of light to act as daylight and heat. A 100 watt UVB lamp should nicely copy the full spectrum of the sun’s light.

You can check out our uvb bulb for turtles review for a more in depth breakdown.

At night, a 60 watt red heat lamp will keep the cage warm. Ensure that the environment is never cooler than 70 degrees Fahrenheit or hotter than 100 degrees.

For your leopard tortoise, supplying it with a steady rate of calcium is very important. The calcium D3 supplement will do nicely, supplied once in a while for adults and daily for the little tortoises.

Wrapping up, tell us about your experience with your leopard tortoise.