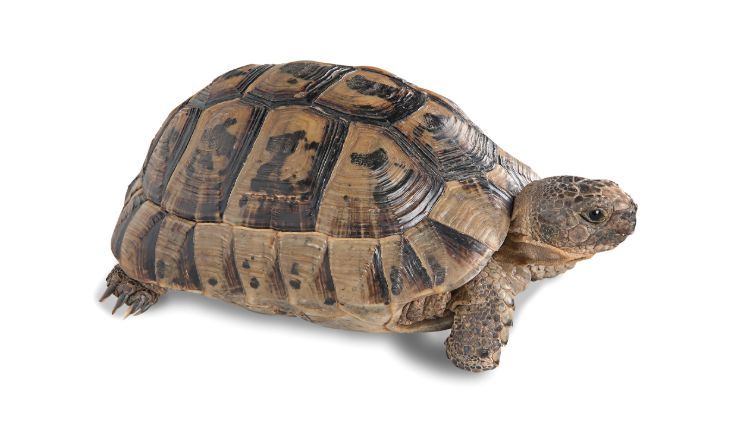 Description of the Greek Tortoise

This type of tortoise can be a variety of colors, including dark yellow, black, gold, and brown. The Greek tortoise actually gets its name from its shell patterns because they resemble a traditional Greek mosaic with different colored dots and borders.

Greek tortoises have a domed carapace and a flat head, large eyes, several big scales on their legs, and strong claws. They do not grow very big, even in adulthood; the average adult Greek tortoise weighs only between two and five pounds and measures at approximately six to seven inches long.

Where is the Greek Tortoise Found

The Greek tortoise can be found in regions all over the globe, including North Africa, the Middle East, southwest Asia, and parts of southern Europe.

These tortoises can also survive in a broad variety of climates, including arid climates, temperate climates, fields, scrub, grassland, dunes, and forests.

Some forms of Greek tortoises which derive from more northern regions settle in areas which are generally between seventy-five and ninety degrees, while those which come from the south are healthiest at temperatures of eighty degrees and above.

When many people see turtles or tortoises, they often assume they can swim because of how turtle are often portrayed in pictures and books.

However, many species of tortoises, including the Greek tortoise, are unable to swim and must be kept solely on land. In order to thrive, Greek tortoises need to spend lots of time outdoors, even in captivity, and have plenty of exposure to full sunlight.

Greek tortoises are herbivores. That means that their diet consists mainly vegetables and they do not consume any meat. Dark leafy greens comprise their primary food source.

Other weeds like sow thistle and antirrhinum and vegetables, including carrots, tomatoes, and squash, are also acceptable foods for Greek tortoises.

In the wild, Greek tortoises often consume a variety of weeds and herbs, including dandelion and thistle. Although it is not an essential part of their diet, these tortoises will also eat grass if they come across it, especially while enjoying outdoor time in captivity.

These tortoises generally live closer to twenty years in the wild due to predators and other dangers, but their life spans are usually extended in captivity as these dangers are eliminated and their safety is increased.

Greek tortoises are one of the longest living species of tortoises currently in existence. Therefore, owning one of these fascinating creatures as a pet is a huge responsibility and commitment that can potentially be passed down for multiple generations.