Ad blocker detected: Our website is made possible by displaying online advertisements to our visitors. Please consider supporting us by disabling your ad blocker on our website.

White disharge in the urine

Hi, I own a land turtle and sometimes I find white disharge in the urine, is that bad or what?
Is it normal in Land turtles?

hmm i tried looking for it but couldn't find anything similar..i have water turtles that's why i don't know a lot about land ones..am sure someone here will be able to help

good luck and welcome to the board

edit: still nothing,,what kind of land turtle do u have? maybe that'll make it easier
Top

is it discharge, or is it solid white stuff?

it might just be poop. i've never had land turtles.. but i had lizards.. and they have the same hole for their urine and poo.... so they'd pop with great brown and white clumps.. does it look like that?

i don't know how it is for turtles... but if it's any color -other- then white.. then i'd be worried.
Top

I don't know what type of Land turtle do i won, here's a pic, if you could tell me that will be perfect please?

I believe that is a redfoot tortoise:

The picture is from the second link below:

cute turtle..it has a baby face

right stray but it looks like an eastern box turtle too

well, except for the face 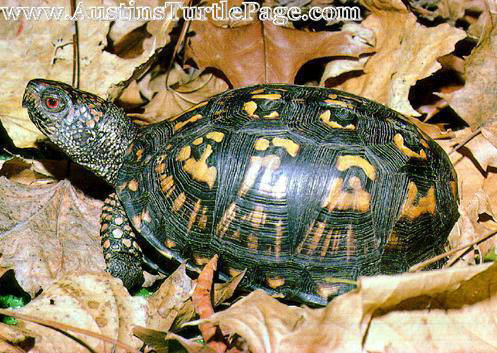 Yeah, but with the exception of the color of the carapace, the little one has spots like the one I posted
and the one you posted kinda has splotches that kinda look like map shapes.
What I did the match on is the shell and the legs, I couldn't find any other with the same matches.

Check this link out, it is a basic description of the redfoot:

Thx about the compliments about my meadow. I'm also thankful to know what type of turtle she is. I do agree she's a red foot tortoise and i'm also happy to know that my turtle is a girl until now.
Thx for the info you gave me.

About the Whtie disharge, I read somewhere that they need to drink more water, is that true?

Glad to have found this board, I was so disoriented....
Top

The white discharge is most likely urates, and one of the reasons for it can be dehydration/not enough water.
Top

This is a completely off topic comment, but here it goes...

I went shopping with my girlfriend to get her a land tortoise. I picked the little guy up, and he released a good amount of a white chunky liquid. It was incredibly disgusting. It went all over my dark blue shirt and I had to go into the mall that way. The pet store clerk said it was turtle spunk. The bad thing is, my girlfriend ended up buying the turtle, but I never picked it up again.
Top

Thanks for the info, I got some on my own.

1) My turtle / tortoise's droppings / urine is white! What does this mean and what should I do? What do normal droppings look like and how often is "normal"?
[Alex {Carter}Dempsey] The white substance is urates (concentrated uric acid). It's a perfectly normal product of protein metabolism, but if it's being passed more than a couple of times a week, it can indicate too much protein in the diet.

Urates should be anything from totally liquid, to about the same consistency as toothpaste. If they're hard or gritty when they're expelled, this indicates dehydration (which is common in terrestrial species kept in vivaria) and if left untreated, dehydration rapidly proves fatal. The tortoise should be bathed immediately by standing it in a bath of shallow, luke-warm water. This should be done daily, until the urates return to normal. Generally, this bathing should be done two to three times every week (more often for hatchlings, who can dehydrate more rapidly than adults).

Re: Stools. A healthy turtle/tortoise produces quite firm, well formed feces. If they contain undigested food, or are runny, then the possibility of parasites should be ruled out by analysis of a stool sample by your vet. If this isn't the cause, then a low fiber diet is the likely culprit. This can be avoided by taking care to feed coarser foodstuffs that are closer to the diet of the species in its natural habitat. Feeding too much fruit, especially to species that wouldn't encounter much naturally, can also cause diarrhea. Frequency of defecation obviously varies depending on how much the turtle/tortoise is eating. If they appear to be straining to produce feces (or haven't gone for several days) try more frequent and prolonged bathing, which can ease mild cases of constipation. If this fails to encourage defecation, a trip to the vet is necessary to rule out the possibility of an intestinal obstruction.

(If they're hard or gritty when they're expelled, this indicates dehydration)
That's my case, I'm gonna give her enough water but what if she doesn't?
Top

ok so just follow what it says and in case it doesn't work call a vet and ask..

toxiceagle2007 wrote:This is a completely off topic comment, but here it goes...

I went shopping with my girlfriend to get her a land tortoise. I picked the little guy up, and he released a good amount of a white chunky liquid. It was incredibly disgusting. It went all over my dark blue shirt and I had to go into the mall that way. The pet store clerk said it was turtle spunk. The bad thing is, my girlfriend ended up buying the turtle, but I never picked it up again.

LOL! i'm so sorry to laugh at that.. but thats so funny!

well...maybe the turtle just liked you?

Definately a Redfooted Tortise. Here's a pic of mine.

One of those sites also helped me find out mine is a girl. Gotta change her name now :/
Top

Powered by phpBB™ • Design by PlanetStyles